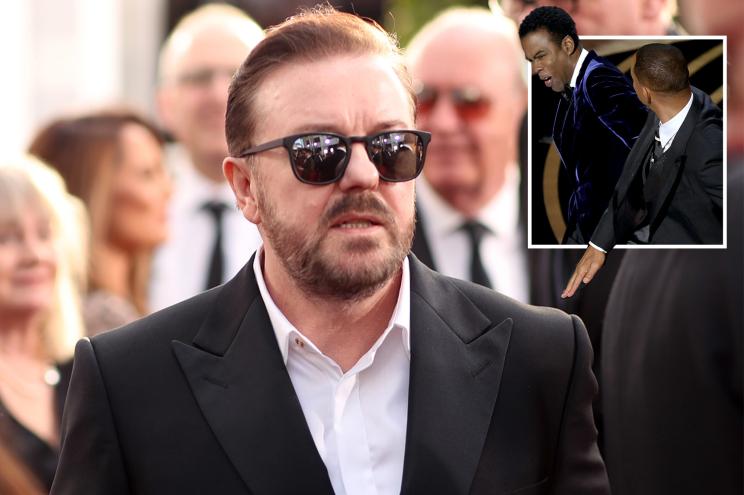 He would’ve gone for the jugular. After Will Smith infamously smacked Chris Rock at the 2022 Oscars, Twitter debated whether the incident would’ve happened if Ricky Gervais had been in Rock’s shoes. Well, the British comic recently weighed in, claiming he wouldn’t have mocked Jada Pinkett Smith’s hair loss as Rock had done — but rather would’ve targeted her open relationship. While performing in London, the 60-year-old “After Life” creator said, “I’ll get it out of the way. I have not got any Will Smith material,” per the Mirror. Of course, Gervais was referring to the incident that occurred at Sunday’s Academy Awards, when the 53-year-old Best Actor winner smacked Rock, 57, after the comedian made a bald joke about Jada, who’s been open about her ongoing struggle with alopecia. “I trended when that happened and I was not even there,” added the original “The Office” mastermind, who has hosted the Golden Globes five times but never the Oscars. “People were going ‘What would have happened if Ricky Gervais had been doing it [hosting the Oscars]?’” Then he dropped his bombshell. “Well, nothing,” said Gervais, “as I would not have made a joke about his wife’s hair. I would have made a joke about her boyfriend.” The comedian was likely referring to 50-year-old Jada’s “entanglement” with much younger R&B singer August Alsina, 29, who claimed that he had had an intense affair with the actress. After years of rumors flying around about what had actually gone down, Will admitted last September that he and his wife were in an open relationship. However, Gervais did seem to poke fun at the hair joke following the Academy Award smack when he retweeted an old bit on alopecia from “The Office.” Many social media users seemed to agree with Gervais, wondering why the “Hancock” actor would strike a comedian over a joke — and not the man who was bedding his partner. “You can f – – k my wife, but keep her name out yo mouth,” mocked one Twitter user. “Will Smith’s marriage is open to EVERYTHING except jokes,” jeered conservative commentator CJ Pearson on Twitter. This isn’t the first time Gervais has teased what he’d say if he were to host the Academy Awards. Earlier this week, the Emmy winner posted a scathing mock-Oscars speech on Twitter. “I’d start with ‘Hello. I hope this show helps cheer up the ordinary people watching at home,’” the comedian sniped. “‘If you’re unemployed for example, take some comfort in the fact that even if you had a job, your salary probably wouldn’t be as much as the goody bag all the actors have just been given.’”