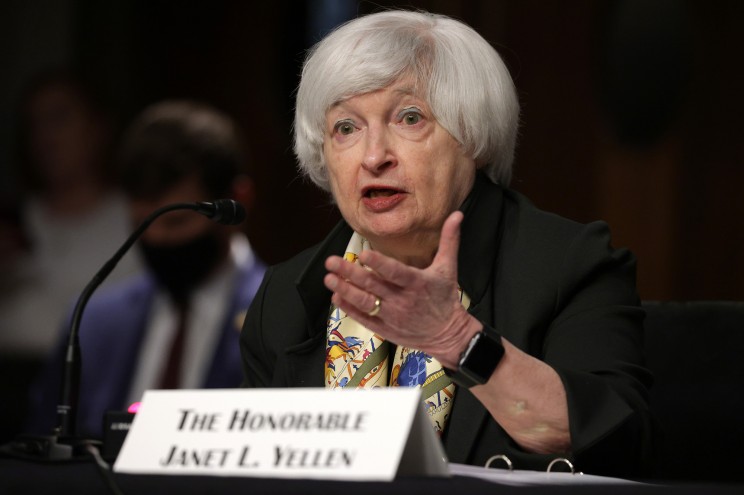 Janet Yellen has stayed tight-lipped since the start of the Ukraine war — and some Washington insiders find the silence deafening. As of Wednesday, the US Treasury Secretary hadn’t made a single TV appearance since the US began imposing sanctions on Russia over the Ukraine invasion. That’s a dramatic about-face from the fall, when Yellen was a fixture on networks like CNBC and CBS’s “Face the Nation,” touting the economic recovery despite nagging inflation and labor shortages. “Treasury implements economic sanctions,” Monica Crowley, former Assistant Secretary of the Treasury, told The Post. “Public messaging — particularly by the Secretary — is absolutely critical. Because these sanctions have such huge consequences, she should be publicly explaining them and their impact. But she is nowhere to be seen.” “We heard a lot from Yellen on inflation and tax policy,” adds James Lucier managing director at Capital Alpha, a Washington-based policy research outfit. “Is this an indication she’s lost sway with the White House? Or an indication she’s already checked out?” Yellen briefly addressed the topic of sanctions last week during a speech at the University of Illinois Chicago’s Innovation Center, where she talked about Biden’s economic agenda and also briefly toured the neighboring Ukrainian village. “Russia is increasingly an economic island,” Yellen said. “We will continue to look at how the sanctions work and whether there are leakages and we have the possibility to address them.” Yellen’s quiet approach comes as Vladimir Putin has branded the sanctions an economic “declaration of war.” The US and EU have frozen the assets of Putin, his friends, and other top Russian officials. The West has banned any transaction with Russia’s central bank and Russian banks have been excluded from the global SWIFT system. The Biden administration has also imposed restrictions on trade of semiconductors, aircraft and oil. “It’s fair to say she has had less of a profile in recent months than she did coming in,” one former agency head told The Post. This person notes that for an official in Yellen’s situation, it’s hard to turn down a plum role: “It’s hard to say no to the president and I’m sure it was even harder to say no to being the first female Treasury Secretary.” While Yellen’s absence doesn’t necessarily hurt the administration’s efforts, it does raise questions about who is the decision maker when it comes to sanctions, policy watchers note. “It raises the question if she’s coordinating with other global finance ministers and who is speaking for the White House on this,” Lucier adds. Yellen’s predecessor Steven Mnuchin had made weekly and sometimes daily appearances on TV — especially during moments of economic crisis like the coronavirus pandemic. Mnuchin also publicly stated at least half of his time was spent on foreign policy issues — particularly sanctions. Treasury declined to make Yellen available for an interview. “Secretary Yellen has worked tirelessly with the president and her colleagues across Treasury and the administration to craft and implement the largest package of sanctions, with the largest global coalition, targeted at the 11th largest economy in the world as it brutally and illegally invades its neighbor country, all in record time,” Alexandra LaManna, a spokesperson for Yellen told The Post. “Her work speaks for itself.”