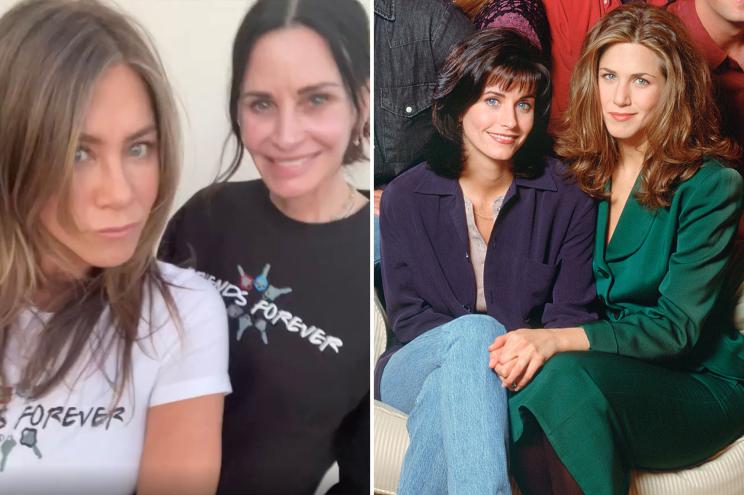 They’ll be there for you forever! Jennifer Aniston, 53, and Courteney Cox, 57, recently reunited in a sweet tribute to their friendship and the show that catapulted them to fame. Aniston shared a Boomerang showing her and Cox modeling “Friends Forever” T-shirts to her 40.2 million Instagram followers. The former “Friends” co-stars debuted the merchandise on Monday captioning the post “friends forever” with a red heart emoji and tagging charities @americares and @ebmrf. The cheeky T-shirts and other “Friends” merchandise are being sold for a limited time to raise money for health and development non-profit organization Americares, and EBMRF, a charity raising awareness for the rare genetic skin disorder Epidermolysis Bullosa (EB). Fans of the show can purchase hats, hoodies, shirts, mugs, phone cases and sweatshirts with iconic “Friends” quotes and moments they’re sure to remember like Aniston’s character Rachel getting off the plane to Paris or Cox’s character Monica’s wild curls when the gang goes to Barbados. The limited-edition cast collection merchandise focuses on Seasons 7 to 10 of the ’90s sitcom and will only be available for four weeks. The charity collection ranges from a $64.99 sweatshirt to mugs going for $19.99. In the Instagram post, Aniston wears a white T-shirt and Cox shows off a black sweatshirt both emblazoned with “Friends Forever” surrounded by a circle of six keys. The design is reminiscent of the heartbreaking show finale when the crew leaves their six keys behind when Monica and Chandler, played by Matthew Perry, move out of their iconic New York City apartment. “Friends” ran for 10 seasons from 1994 to 2004 becoming one of the most popular television shows of all time — the series finale was the most-watched television episode of the 2000s. The cast of the popular show famously reunited for a televised walk down memory lane in 2021 for “Friends: The Reunion” but shared that they have stayed in touch throughout the years. Aniston, Cox and Lisa Kudrow seem to share an especially close bond hanging out and speaking fondly of each other often.