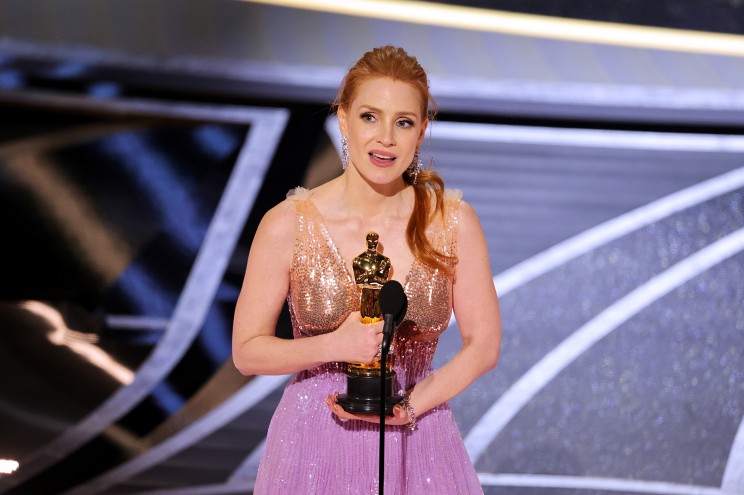 Jessica Chastain won the Oscar for Best Actress, awarded by presenter Anthony Hopkins. In her speech, broadcast live from the Dolby Theatre in Los Angeles, Chastain drew large applause and thanked her “brilliant” co-star Andrew Garfield. “So many people out there feel hopelessness and alone and suicide is a leading cause of death in the United States,” she noted. “It’s touched many families. It’s touched mine and especially members of the LGBTQ community…we’re faced with discriminatory and bigoted legislation that is sweeping our country with the only goal of further dividing us. There’s violence and hate crimes…in times like this, I think of Tammy and I’m inspired by her radical acts of love.” Chastain edged out fellow nominees — Olivia Colman (“The Lost Daughter”), Penelope Cruz (“Parallel Mothers”), Nicole Kidman (“Being the Ricardos”) and Kristen Stewart (“Spencer”) — for the win. A first-time winner, 45-year-old Chastain plays former televangelist personality Tammy Faye Messner, who once had a cult following with husband Jim Bakker on their religious broadcasting network before he was jailed for fraud and enveloped in a sex scandal, in the Michael Showalter-directed film. Chastain — who was nominated for Oscars twice in her career, for Best Supporting Actress in “The Help” and Best Actress in “Zero Dark Thirty” — said playing Tammy left her with “permanent” damage to her skin due to the “heavy” makeup. “I think for sure I’ve done some permanent damage to my skin on this. Listen, I eat very pure, and I take very good care of my skin and I stay out of the sun and all that stuff,” she explained to the Los Angeles Times. “But it’s heavy. And when you’re wearing it all day, every day — the weight of it on your body, it stretches your skin out.”