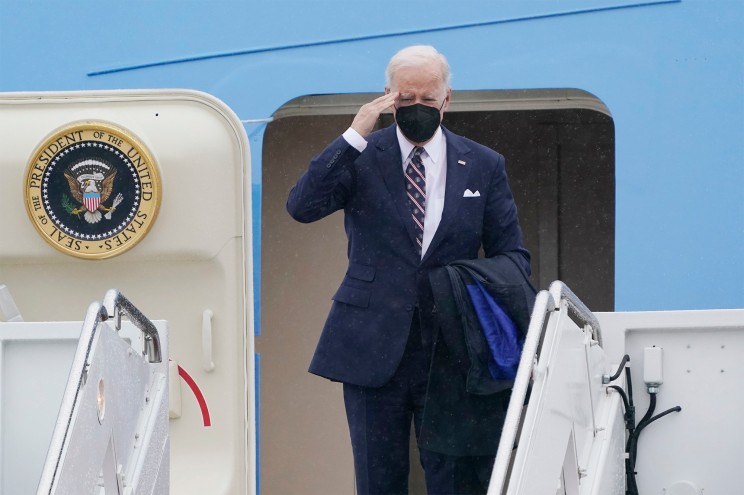 President Biden landed at New York’s JFK Airport Thursday afternoon ahead of his meeting with Mayor Eric Adams and Gov. Kathy Hochul to discuss the city’s surging gun violence crisis. Biden and Attorney General Merrick Garland touched down on Air Force One after their departure from Joint Base Andrews in Maryland was delayed more than an hour. The duo are scheduled to meet with Adams and Hochul at NYPD headquarters in Manhattan later in the afternoon to address the crackdown on illegal guns coming into the state. The group will then head to a public school in Queens to talk with violence interrupters about local efforts to eradicate gun violence. Biden’s crime-focused visit comes a day after the funeral for the second NYPD officer gunned down in the line of duty last month was held in Manhattan. Asked why Biden didn’t push his visit earlier to attend Det. Wilbert Mora’s funeral in a show of support, White House press secretary Jen Psaki told reporters aboard Air Force One the trip had been coordinated with Adams’ office. “Why not go to one of the officers’ funerals if you’re going to come to New York and show support for the law enforcement?” a reporter asked. Psaki responded: “We have been planning this trip in coordination with the mayor’s office. We’ve invited a number of officials to attend the trip. He also is, as you know, going to the police headquarters to make clear his strong support for them.” She insisted that Biden’s record on supporting law enforcement was clear, saying “he has a long record of advocating for, supporting through funding, through speaking out, the role of local police, of national police and the important role they play in addressing crime and keeping communities safe.” The city has grappled with a series of high-profile crimes in the last month, including the deaths of NYPD cops Wilbert Mora and Jason Rivera, a deadly subway shove under Times Square, a stray-bullet shooting of a baby and a deadly robbery at a Burger King. During the visit, the president is expected to address new initiatives announced earlier Thursday that aim to target illegal ghost guns and firearms trafficking along the East Coast “iron pipeline.” Among the slew of measures is the Justice Department’s new National Ghost Gun Enforcement Initiative, which aims to clamp down on homemade firearms that lack serial numbers used to trace them. The president’s appearance in the Big Apple comes as Biden’s deputies struggle to battle the perception that he’s not doing enough to address surging violent crime. “I’m sorry for people who feel they need to be critical, but the president has been a longtime advocate of addressing crime. He’s never been for defunding the police,” Psaki said Monday. Although Biden spent much of his 36 years in the Senate authoring or supporting harsh criminal penalties and more funding for police and prisons, he trod lightly in the wake of nationwide 2020 protests against police brutality. As murders soared in parts of the country, Biden urged state and local governments last June to use leftover funds from $350 billion in COVID-19 aid to hire more police. Of that funding, New York state got $12.7 billion and NYC got about $6 billion. Biden has since proposed a $300 million budget that calls for increased funding for local community policing programs — but that effort is stalled in Congress. He is expected to urge Congress to pass the funding measure during his visit to New York.