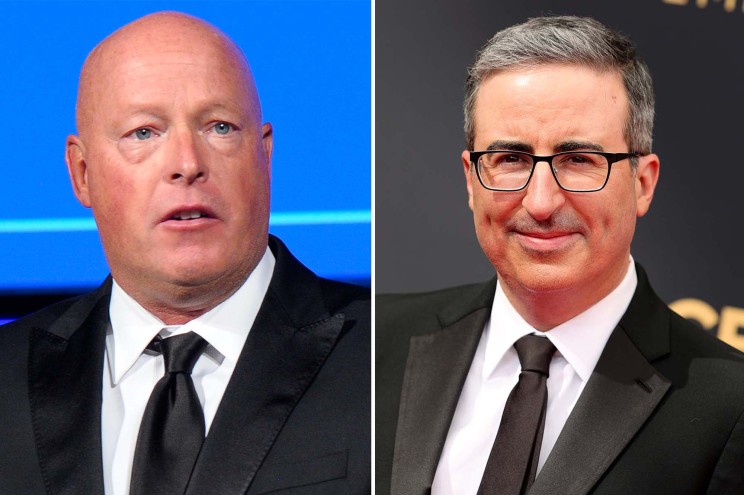 John Oliver slammed Disney CEO Bob Chapek over his response to Florida’s controversial “Don’t Say Gay” bill — calling it “actively insulting.” The comedian kicked off Sunday’s “Last Week Tonight” show by remarking that it had been a “bleak few weeks for the LGBTQ community” and then explained the intricacies of Florida’s bill, concluding that in his view, “It’s not about sex at all — it’s about denying the existence of gay people.” The Florida bill would ban teachers from discussing topics like sexual orientation or gender identity with students until after the third grade. Over the past two weeks, Disney’s Chapek has waffled on weighing in, at first remaining silent on the bill, and later — when it came to light that Disney had made prior political donations to lawmakers supporting the bill — revealing that Disney had been actively fighting the bill behind the scenes. At a shareholders meeting last week, Chapek explained: “When we donate money to different political candidates, we have no idea how they’re going to vote going forward into the future.” “That is such blls–t,” said Oliver on his show Sunday. “It is actively insulting because it’s just not how donating works. When you donate money, you generally know what the recipient is going to do with it. That is why people donate to ‘Feeding America’ and not ‘Feeding America Or Maybe Taking Food Away From America.’” Chapek made his statement in response to criticism that Disney had donated to Florida state Sen. Dennis Baxley, one of the chief sponsors of the “Don’t Say Gay” bill, which will likely be signed into law by Gov. Ron DeSantis. “Disney should absolutely have had a pretty good idea how Dennis Baxley would vote when they gave him money, given that he’s not been shy about sharing his views on a host of topics,” Oliver said in response. Oliver played a clip of Baxley meeting with a few constituents and warning them, “I know some districts where there’s a big infestation of homosexuals that are pushing their agenda.” Oliver noted Baxley’s use of word “infestation.” The TV host called its use “disgusting,” and then turned to Chapek, whom he called a “business thumb.” The comedian mocked Chapek’s stance that the “diverse stories” the company produces, such as “Encanto” and “Black Panther,” are “more powerful than any tweet or lobbying effort.” “That’s obviously nonsense,” Oliver said. The segment ended with the host dismissing Chapek’s apology last Friday and Disney pausing its political donations in Florida pending review. He concluded: “Marginalized creators have made billions of dollars for Disney. Now, should it embarrass them that it took them until this week to realize that they shouldn’t take that money and use it to actively undermine those creators’ interests? Who’s to say? I’ll tell you: I am.” (Oliver was the voice of Zazu in Disney’s remake of The Lion King.) DeSantis has defended the bill, saying it isn’t about discrimination, but instead is meant to ensure there’s no “sexual instruction” given to young students. “When you actually look at the bill and it says ‘no sexual instruction to kids pre-K through three,’ how many parents want their kids to have transgenderism or something injected into classroom instruction?” DeSantis said, according to a CBS News report. “It’s basically saying for our younger students, do you really want them being taught about sex? And this is any sexual stuff,” he said. “But I think clearly right now, we see a focus on transgenderism, telling kids they may be able to pick genders and all of that.”