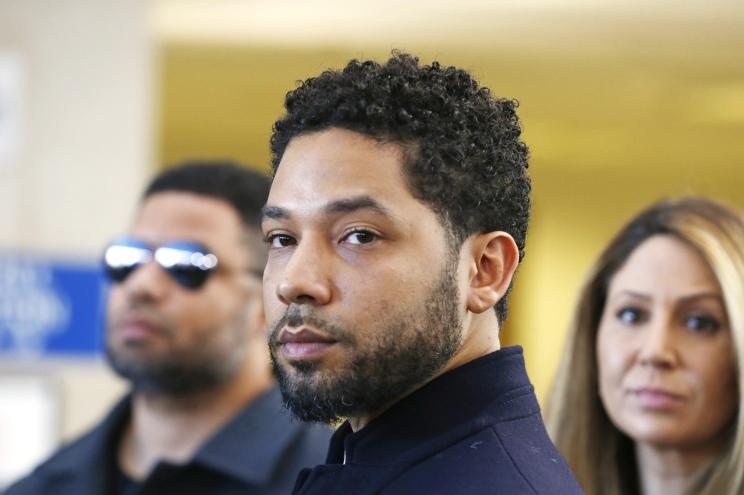 Jussie Smollett chided police and prosecutors and declared his innocence in a song released Friday — three weeks after he was sprung from a Chicago jail while his lawyers appeal his conviction for staging a hate crime. Smollett, who was found to have paid two men to pretend to be racist and homophobic Donald Trump supporters and attack him with a noose and bleach, released a nearly six minute long gospel-influenced R&B track called “Thank You God…” on streaming platforms. After a choir sings “thank you God for showing me my enemies,” the 39-year-old disgraces actor lays down a spoken-word verse deriding the press and law enforcement for supposedly falsely accusing him of the 2019 stunt. “It’s like they’re hell-bent on not solving the crime / Taking out the elements of race and trans and homophobia that’s straight taking lives / But turn around and act like I’m the one that killed the strides,” the black and gay actor slowly raps over a sparse beat, as an apparently Auto-Tuned singer harmonizes his denials. “I can’t be mad / Take my ego out / Some people searching for fame / Some people chasing that clout / Just remember this, this ain’t that situation / You think I’m stupid enough to kill my reputation?, Smollett continues. “Just simply to look like a victim like it’s something fun / Y’all better look at someone else, you got the wrong one.” The former “Empire” star, who prosecutors alleged orchestrated the crime to raise his public profile, then tracks a stanza rebuking his infamy. “All I ever wanted to do was make my people proud / Fame is nothing real, it’s how you make them feel / Celebrity is for the birds, I ain’t no man of steel,” he rhymes as the tune gives way to an extended refrain followed by an exaggerated outro. Any profits from Smollet’s musical declaration of innocence will be donated to the Rainbow Push Coalition, STB Safety and the Illinois Innocence Project, the artist said on his Instagram, which according to the bio is currently run by his family. The sob song had less than 5,000 listens on Spotify early Saturday morning. Smollett is currently free on $150,000 bond while lawyers argue his trial was “unconstitutional” because Chicago officials had dropped all charges against him before a special prosecutor took over the case amid widespread outrage from lawmakers.