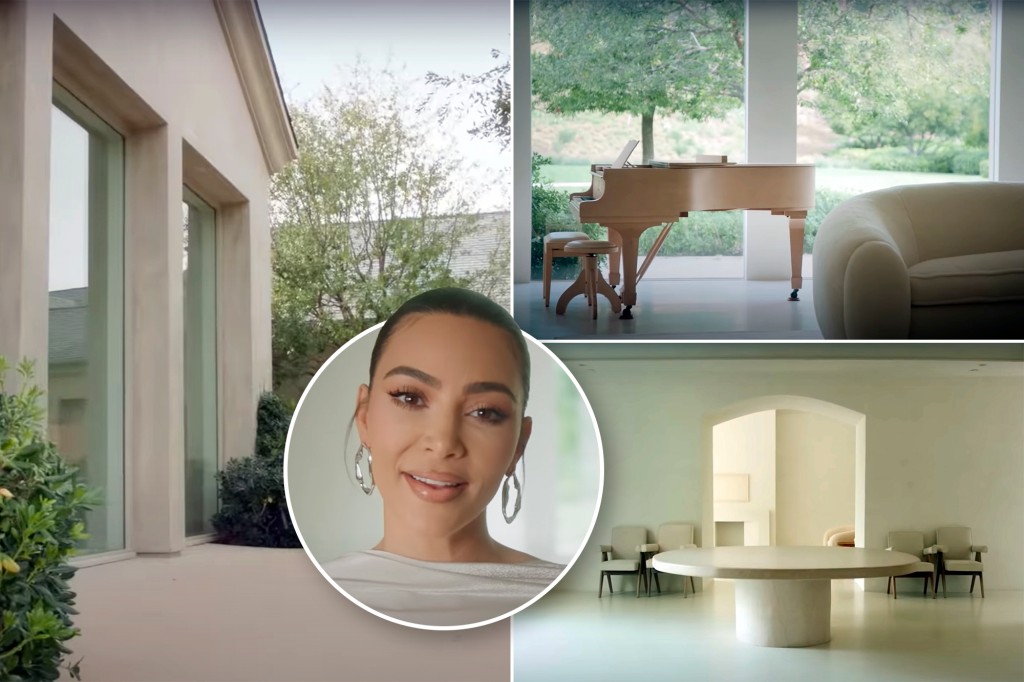 With all the drama going on in her personal life, it’s no wonder Kim Kardashian wants her home to be a haven of safety and serenity. The reality TV queen, 41, allowed Vogue a look inside her calming Calabasas compound — which she bought from Kanye West for a whopping $23 million after she filed for divorce last year. “Everything in my house is really minimal,” Kardashian stated at the beginning of her home tour. “I find there’s so much chaos out in the world that when I come home I want it to be really quiet and I want everything to feel calming.” Kardashian first purchased the home back with West back in 2014, before they gutted and rebuilt it from the ground up over the course of six years. The former couple first allowed Vogue inside their strikingly sparse space back in 2019, and it was featured on the cover of Architectural Digest in February the following year. But while West, 44, may have moved out, the new Vogue video shows the neutral aesthetic still remains in place. In the new video, Kardashian first takes cameras into the home’s kitchen, which features white marble countertops and light wood cupboards. While the Skims founder is mom to four kids — North, 8, Saint, 6, Chicago, 4, and Psalm, 2 — the kitchen is devoid of the clutter that fills most family kitchens. “Each kid can have their full style and taste in their bedroom and have so much fun, but in the main house, I really like the calmness,” she declared. see also The same minimalism is present in Kardashian’s sitting room, which she also showed off in the Vogue video. The room features a small fireplace and floor-to-ceiling windows, which are covered with white curtains. A curved white couch and two matching chairs are the only pieces of furniture inside the room. Elsewhere in the video, the superstar takes cameras to her home’s basketball court, located in the spacious backyard. The court overlooks a gym, with Kardashian claiming she and her sisters often use to work out in. “It’s the most amazing place for the kids to hang out,” Kardashian cooed of the outdoor space. Meanwhile. the beauty also gave a glimpse of her impressive car collection, claiming she has had all her vehicles painted gray so they match the color of her house. Kardashian showed off her three of her fancy cars — a Lamborghini, a Rolls Royce and a Maybach — saying they were among her most prized possessions. And while her ex has moved out, she won’t need a car to drive to his new home. Last December, West bought his own property right across the street for $4.5 million in order to be close to Kardashian and their kids.