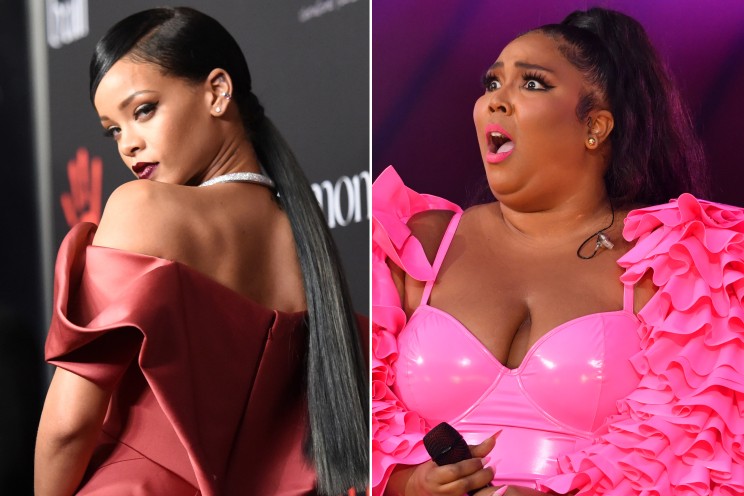 Lizzo’s friendship with Rihanna is apparently “Good as Hell.” The 33-year-old Grammy-winner recently suggested that the “Umbrella” singer has some playful juice in her. “We are friendly. The thing about Rihanna is if she f–ks with you, she f–ks with you. By the grace of the godd–n stars, she f–ks with me,” Lizzo told Variety in a new interview. She also expressed her joy for her newly pregnant BFF, who turned 34 on Feb. 20 and is expecting her first child with rapper boyfriend A$AP Rocky. “I’m so happy for her being pregnant,” said Lizzo, who hit the runway for Rihanna’s 2020 Savage X Fenty show. I’m like, ‘S–t. I’m about to get pregnant.’” Lizzo, a Detroit native known for being a badass woman who stays true to herself in the entertainment industry, rose to fame in the last few years with hit singles including “Juice” and “Truth Hurts.” But she told Variety that the issues that came with notoriety — “the loss of who I was” — forced her to start talking to a therapist. “Fame happens to you, and it’s more of an observation of you,” Lizzo said. “People become famous, and it’s like — my DNA didn’t change. Nothing changed about me. My anxiety didn’t go away. My depression didn’t go away,” the flute player continued, while also noting that she didn’t “want to seem ungrateful” about her good fortune and fame. “The things that I love didn’t go away. I’m still myself. But the way y’all look at me and perceive me has changed. It’s a very weird, kind of formless thing.” “Most famous people have been famous just as long as they’ve been a person, so they have acclimated more to it. I was going into dive bars and getting s–tfaced in 2018,” Lizzo explained. “And nobody knew who I was, and nobody was bothering me. By 2019, I noticed I couldn’t go to restaurants with my dancers and stuff.” That led to her feeling that she was “a burden” to her friends. “It bummed me out because you do lose a sense of your privacy and yourself, the old self,” she continued. “I’m good with it now. I’m fine. I’m young. I’m talented. I deserve the attention.” The singer will next be seen in her new Amazon reality TV series “Lizzo’s Watch Out for the Big Grrrls,” dropping March 25. The eight-episode show will follow Lizzo as she seeks to find the best twerking backup dancers to join her for live performances. “I’m a very hands-on person,” said Lizzo, who is a producer on the show. “Anything that I’ve put out, I’ve touched so many f–king times. Thanks to Amazon and this show, I feel more like a boss.” The “Boys” singer, who said she is currently working on a “bada–” new album, also spoke about her audition for the role of Ursula in the upcoming live-action film “The Little Mermaid.” While she didn’t get the part — the role ultimately went to Oscar nominee Melissa McCarthy (“Bridesmaids”) — Lizzo joked about her qualifications to play the character. “I’m fine as hell,” she enthused. “That has nothing to do with Ursula, but I was down to make Ursula a THOT, shaking a–.”