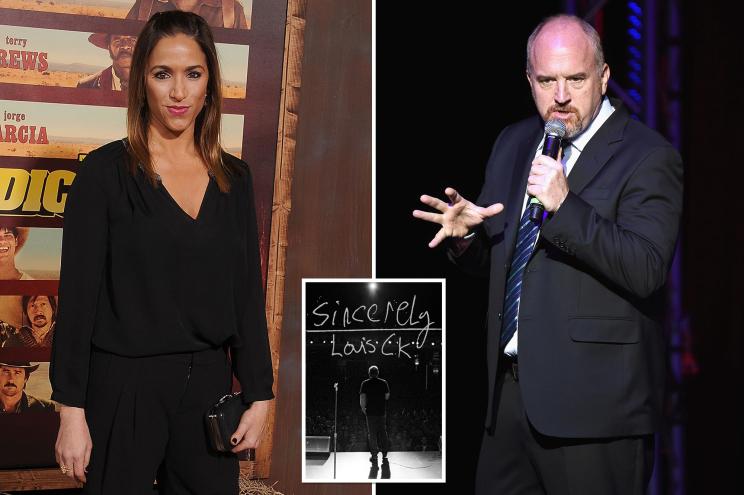 Social media watchdogs aren’t the only ones barking about Louis C.K.’s 2022 Grammy win: Sexual misconduct accuser Julia Wolov weighed in disgraced comic’s award, which she has now labelled “such bulls–t.” “What is wrong with people?” comedy writer/actress Wolov told Variety of 54-year-old C.K.’s Grammy, which he won last week for Best Comedy Album. The red-headed humorist had garnered the award — his third ever — for the recording of his special “Sincerely Louis C.K,” in which he poked fun at his own sexual harassment allegations. The “Louie” creator self-released the special for $7.99 on his website after Netflix, HBO and FX severed ties with the comedian in 2017 amid the scandal. The Emmy-winner had been accused by five women — including Wolov — of exposing and pleasuring himself in front of them without consent. C.K. later confirmed the allegations to be “true,” saying “when you have power over another person, asking them to look at your dick isn’t a question. It’s a predicament for them.” see also “The power I had over these women is that they admired me,” the “Horace and Pete” star added. “And I wielded that power irresponsibly.” Wolov believed that C.K.’s accolade proved that the MeToo movement didn’t have as much cultural resonance as she thought. “Nobody cares. That’s the message this sends,” lamented Wolov, who had reportedly fled from the “Blue Jasmine” actor after he masturbated in front of her at a comedy festival in 2002. “It really does. That’s the truth.” The disillusioned actress continued, “Wouldn’t it be nice if people would not be rewarded for bad behavior? But what are you supposed to do? These people voted for him. I guess that’s what happens when comedy and music come together.” Wolov deemed C’K’s Grammy win proof that celebrity cancel culture does not actually exist. “I don’t believe in cancel culture, but obviously, Louis is not canceled,” The “Dana and Julia Show” star explained. “He seems fine to me. He’s touring. He’s selling out. He’s winning Grammys.” ‘Whoever the decision-makers are, is it that necessary that you have to work with this person who has been showing his d–k to everyone in town?’ Julia Wolov, one of Louis C.K.’s five sexual harassment accusers Despite her criticism, recording Academy CEO Harvey Mason Jr. says that the music institution won’t stop certain artists from submitting content. “We won’t look back at people’s history, we won’t look at their criminal record, we won’t look at anything other than the legality within our rules of, is this recording for this work eligible based on date and other criteria?” The music executive told The Wrap “If it is, they can submit for consideration.” The lack of consequences is perhaps doubly disheartening considering the backlash Wolov and her fellow C.K. accusers received following the allegations. Some have reportedly even accused the quintet of trying to cash in on the comedian’s fame. “Of course, his fans will say it’s because we’re not funny or we’re gold diggers — that’s my favorite, like, we got so rich from this,” she said. “People will say we want attention. Trust me, this is not the attention that I ever hoped for.” see also And while still undecided on an appropriate punishment, Wolov called on the Hollywood powers that be to refrain from employing C.K. saying: “Whoever the decision-makers are, is it that necessary that you have to work with this person who has been showing his d–k to everyone in town?” She found it anathema that so many people wanted to work with the controversial comic given that there “are so many funny people” out there. Elsewhere, Wolov rued the fact that while entertainment giants like Disney might no longer employ the “American Hustle” actor, a “little black box comedy club can do whatever they want.” “Everyone is about the bottom line,” the “Just Go With It” co-star explained. “If Louis can sell tickets for a small comedy club, then they will.” Indeed, just last year, C.K. embarked on a sold-out 24-city comedy tour of the US, Variety reported. Wolov summed up the situation like this: “If people want to see them, good for them. Who is going to tell him he can’t go on stage? I’m not. I really don’t care what he does. It makes no difference to me. All I can do or say is live and be well far away from me.” C.K. isn’t the only one accused of getting distinguished amid scandal. Many social media users felt it was hypocritical for the Academy to penalize Will Smith following for the “Hitch” slap after failing to jettison accused sex abuser Roman Polanski for more 40 years after the alleged act. They also referenced serial predator Harvey Weinstein, and other teflon-seeming celebs who also managed to side step Academy blacklisting for years until their defenestration.