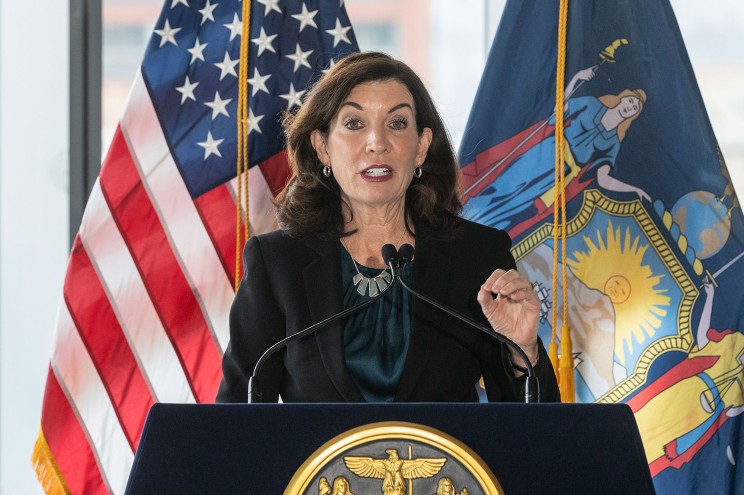 The coronavirus pandemic has likely killed the traditional schedule of commuting to the office for work five days a week, Gov. Kathy Hochul said. “It may never be a five-day week again,” said Hochul. “It may be four days with flexibility. It may be three and a half,” she said following an event in Harlem on Tuesday. Still, the governor said she wanted employees occupying office buildings “at least three to four days at minimum” to spur economic recovery. She said in-person work spurs creativity and social development. “People staying home now are missing a state comeback,” she said. The governor said the decline of the COVID-19 omicron wave and lifting of mask mandates should put New Yorkers at ease about commuting and in-person work. Hochul also acknowledged there’s a concern among employers that they’ll lose workers who’ve gotten accustomed to remote work during the pandemic if they order them back to the office five days a week. The head of the city’s largest business group agreed that Hochul’s assessment about work location flexibility was correct. “Gov. Hochul has met with a lot of employers over the past few months and she is accurately reflecting their view of the future of office work. People will be expected back in the office but with some greater flexibility than in the past,” said Kathryn Wylde, CEO of the Partnership for the City of New York. Business leaders have also raised concerns about the surge in violent crime and thefts during the two-year pandemic — particularly in the subway — that poses an obstacle to brining workers back to Manhattan offices. The Post previously reported that city firms offered nearly quadruple the number of remote jobs to new applicants in the past year — meaning a growing trend of employees working mostly or exclusively outside the main office.