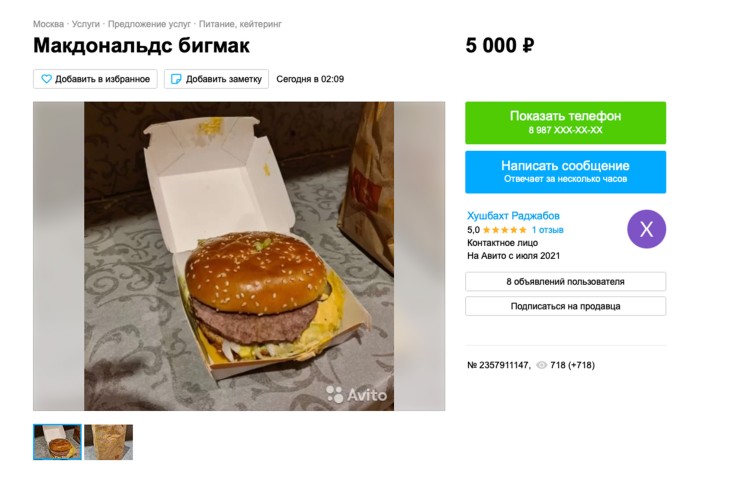 Russians are flooding a popular online resale platform with listings for McDonald’s menu items – with some trying to charge exorbitant sums for basic cheeseburgers after the fast-food giant closed its Russia stores in response to the invasion of Ukraine. A search of Avito, a popular Russian classifieds and auction platform similar to eBay, revealed posts for everything from Big Macs to McDonald’s cherry pies and signature sauces. The listed prices were often far above normal menu prices. For example, one listing asked 5,000 rubles, or about $44, in exchange for a single Big Mac. Another poster asked for 10,000 rubles, or roughly $88, for two classic McDonald’s cheeseburgers “with a taste of American bygone capitalism,” according to a translation. They’re apparently McDonald’s items that the sellers stashed away before the American outlet closed in Russia. Under normal conditions, a Big Mac sold at a Russian McDonald’s store cost about 135 rubles, according to The Economist’s “Big Mac Index” — the equivalent of less than six US dollars. One seller was seeking 1,000 rubles apiece ($8.75) for individual containers of McDonald’s sauces. Another wanted 400 rubles (about $3.50) for a small order of chicken nuggets. As The Post previously reported, the resale listings first began appearing last week after McDonald’s said it would temporarily close its 850 stores in Russia and pause operations over the Ukraine invasion. The announcement also sparked long lines at stores and drive-thru locations as fast-food-loving Russian attempted to get one last McDonald’s meal or stock up on their favorite items. One viral Reddit post showcased a Russian’s fridge stocked with dozens of McDonald’s cheeseburgers. McDonald’s is just one of countless companies based in the US or other Western nations who have cut ties with Russia. The value of the Russian ruble has collapsed as the country’s economy reacts to the loss of businesses as well as crippling economic sanctions against key financial institutions. Get the latest updates in the Russia-Ukraine conflict with The Post’s live coverage. Meanwhile, there are signs that Russian officials are mulling ways to retaliate as companies exit. Last week, Russian state-run media suggested officials were considering rollbacks of protections on intellectual property – a move that one expert warned could clear the way for local operators to keep McDonald’s stores and other businesses open without permission.