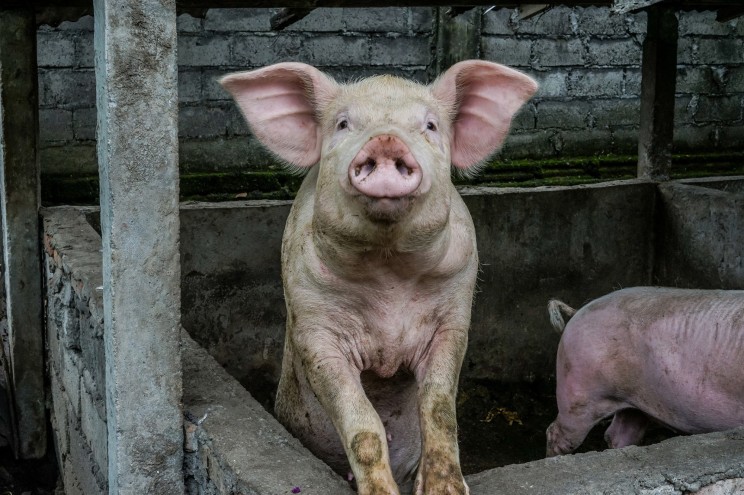 An animal rights group says McDonald’s is lying by claiming that it is phasing out business ties with hog farmers who keep pregnant pigs confined to narrow cages for weeks at a time. The Humane Society of the United States says that McDonald’s still sources pork from clients who lock pigs in gestation crates for the first five weeks of their 16-week pregnancy. McDonald’s had previously pledged to significantly reduce its reliance on farmers who keep pregnant sows confined to so-called “gestation crates” for the entire duration of the 16-week pregnancy. But the Humane Society now says that McDonald’s is skirting the issue through semantics by buying pork from hog farmers who keep the sows locked in crates for the first five weeks of the pregnancy. “From an animal welfare perspective, locking a pig in solitary confinement so tight she can’t even turn around for five weeks at a time — each pregnancy cycle — still amounts to suffering the likes of which is almost unparalleled in all of agriculture,” Josh Balk, a spokesperson for the Humane Society, told the Post. The Post has reached out to McDonald’s seeking comment. A company spokesperson told Bloomberg: “We disagree with this inaccurate characterization of our industry-leading pledge and subsequent progress we’ve seen the industry make at scale, including that an estimated 30-35% of U.S. pork production has moved to group housing systems.” McDonald’s has come under pressure from the Humane Society and billionaire activist investor Carl Icahn, who have insisted that the fast food giant cease all business with pork producers that use gestation crates. Icahn, who owns a small stake in McDonald’s but has nonetheless threatened a proxy fight over the issue, recently nominated two board members. A decade ago, McDonald’s pledged to “source all pork for its US business from producers that do not house pregnant sows in gestation stalls by the end of 2022.” The Humane Society said that McDonald’s allowed itself to skirt its commitment by pledging not to do business with farmers who confine “confirmed pregnant sows.” The group says farmers “confirm” pregnancy up to five weeks after artificial insemination. It is only then that they are taken out of the crates and moved into “group housing” with other pigs, according to the Humane Society. McDonald’s has said that the demand from Icahn and the Humane Society for pork producers to immediately abolish the use of all gestation crates is not realistic. Icahn has said that the crates cause “unnecessary suffering” for the animals.