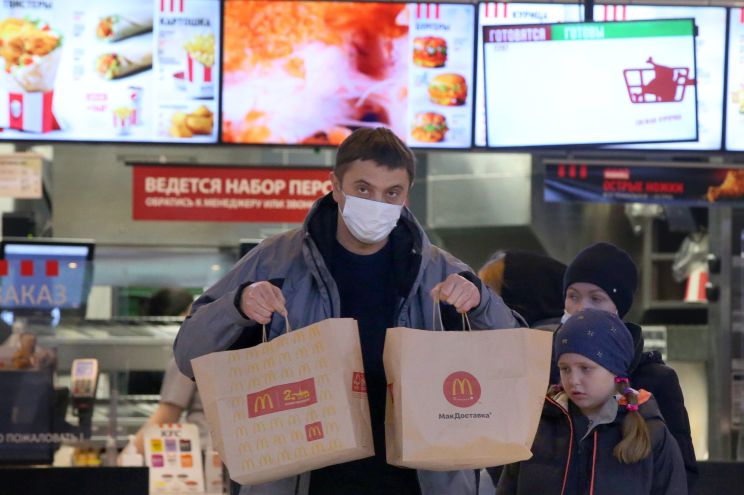 McDonald’s, KFC and other big US fast food brands are likely bracing themselves for a politically driven backlash in Russia, restaurant industry watchers said. In the past when tensions have flared over Ukraine, Russia has closed certain McDonald’s outlets in the country, claiming “sanitary violations.” The country’s officials could act in such a way again if anti-American sentiment deepens over the war in Ukraine. Last week, McDonald’s investor relations disclosed that it owns the vast majority of the 847 McDonald’s stores in Russia and that it owns all of the 108 eateries in Ukraine. That’s a change from its model in the US and much of the rest of the world, where franchisees own the outlets — and it exposes the corporation to greater risk. Combined, those restaurants represent 9% — or $2.1 billion — of the company’s worldwide revenues. “I never would have expected that these two markets alone generated about 9% of McDonald’s worldwide revenues out of some 120 countries,” restaurant analyst Mark Kalinowski told The Post. McDonald’s doesn’t typically disclose detailed information about its holdings in individual countries, Kalinowski added. Other chains have a similar number of eateries in Russia. In August, KFC said it had just opened its 1,000th restaurant in Russia, where it typically opens 100 eateries a year, the company said. Papa John’s operates about 185 restaurants in Russia, the company said on an earnings call last week while Burger King has about 550 eateries in the country. The last time tensions between the US and Russia flared over Ukraine, Russia ordered the temporary closure of four McDonald’s restaurants in Moscow over alleged sanitary violations. At the time, a prominent Russian politician – Vladimir Zhirinovsky – called for McDonald’s to be shut down across country after the restaurant company withdrew from Crimea after Russia took over the region from Ukraine. Later that year, a consumer watchdog in Russia sued McDonald’s claiming that the company was deceiving consumers about the nutritional value of its food. McDonald’s did not immediately respond for comment about the current situation. But its supplemental information also pointed out that its business in Russia and Ukraine accounts for less than 3% of its operating income, or profit. Most of the restaurant companies have sought to tamp down speculation about their exposure to the conflict with Papa John’s chief executive, Robert Lynch, adding on the earnings call that “in general this really won’t have a big impact on our operating situation or commensurately financials.” The Ukrainian McDonalds are currently closed “for safety reasons,” the company’s operation there said on Facebook on Sunday, but it also said “local authorities” were taking its products and “distributing them where they are needed most.” According to a Kyiv Independent report, both KFC and McDonald’s are donating food via their stores in the Ukraine to citizens and the military.