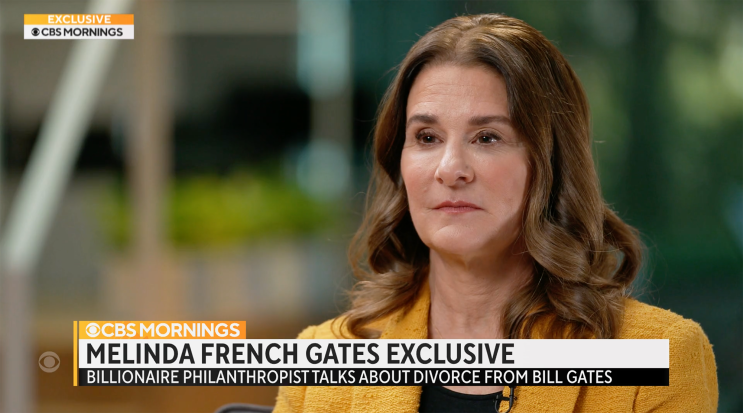 Contact The Author Melinda French Gates said trust was “broken” during her ill-fated marriage to Microsoft co-founder Bill Gates, eventually leading to their bombshell divorce. Gates reflected on her “journey of healing” following her painful and high-profile divorce from Microsoft co-founder Bill Gates in an exclusive interview with “CBS Mornings” anchor Gayle King. Melinda and Bill were married for 27 years before announcing their split last May. French Gates told King that she shed “a lot of tears for many days,” and recalled lying on the carpet thinking, “How can this be? How can I get up? How am I going to move forward?” She said that there were days when she was angry following the split. “That’s part of the grieving process,” she said. “You’re grieving a loss of something you thought you had and thought you had for your lifetime.” “I mean, this is painful stuff,” she continued. “And at the end of the day though, I started on this journey of healing, and I feel like I’m starting to get to the other side. And I do feel like I’m turning a page in the chapter now. I mean, it’s 2022, and I’m actually really excited about what’s to come and life ahead for me.” King also asked French Gates about the revelation that her husband had an affair back in 2000. “I certainly believe in forgiveness, so I thought we had worked through some of that,” French Gates said. “It wasn’t one moment or one specific thing that happened. There just came a point in time where there was enough there that I realized it just wasn’t healthy, and I couldn’t trust what we had. Melinda French Gates tells @GayleKing it’s possible to regain trust in a relationship, “but it’s very hard to get it back in any relationship.” She opens up about fighting for gender equity — as well as her divorce, in our exclusive interview, Thursday. pic.twitter.com/yV1Xn6Td4z— CBS Mornings (@CBSMornings) March 2, 2022 The 57-year-old philanthropist’s rare television interview will air in its entirety on Thursday. It is the first time she has spoken publicly about her divorce. The Tiffany Network released a teaser of King’s sit-down with the tech mogul’s ex-wife. “Once trust is broken, isn’t it hard to get it back?” King, 67, asks French Gates in the clip. “Very, it’s very hard to get it back, in any relationship,” she responds. The couple finalized their divorce last summer. News of their split was followed by reports of Melinda’s fury over her then-husband’s ties to convicted pedophile Jeffrey Epstein. Melinda Gates was also reportedly angered by claims that Bill’s money manager sexually harassed women. Bill Gates was also said to have maintained a years-long affair with a Microsoft employee. When the employee informed the company board in 2019, Gates stepped down around the same time that an internal investigation was launched. The pair founded the Bill and Melinda Gates Foundation while they were together and built it into one of the largest charitable organizations in the world. At the time divorce papers were filed, Bill Gates was worth an estimated $130 billion. The couple did not sign a prenuptial agreement. Shortly after the divorce was finalized, Bill Gates told CNN’s Anderson Cooper that his split from Melinda was a “very sad milestone” and a source of “personal sadness.” Gates told the anchor that he and his ex-wife will continue their philanthropy work together, citing her “incredible strengths” in furthering the missions of the Bill and Melinda Gates Foundation. Melinda has said she will try to work with Bill on the foundation for at least two more years. “I’ve always enjoyed our work together,” Gates told CNN. “You know the two of us can go out and work with leaders and help build the organization, so that would be definitely the best thing for the foundation.” Bill and Melinda Gates were seen together during the wedding of the oldest of their three children, Jennifer Gates, 25, who exchanged vows last fall with Nayel Nassar, a 30-year-old equestrian, in Westchester County.