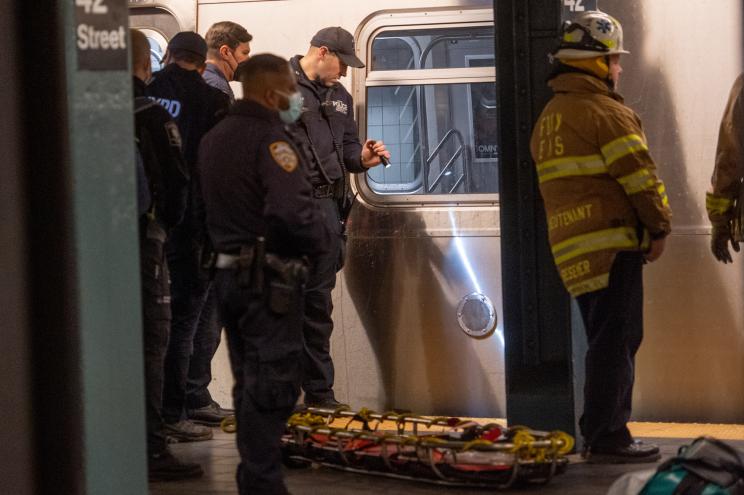 Crime is running rampant throughout Manhattan’s key commercial neighborhoods — and local business leaders are banding together to demand help from Gov. Kathy Hochul. Crime across Manhattan’s Midtown South district has spiked by more than 50% year to date — wreaking havoc across a crucial corridor for commuters and shoppers alike that includes Penn Station, Grand Central Terminal and the Port Authority, police data show. Meanwhile, grand larceny is up 45% on the Upper East Side, which encompasses prime shopping strips on Madison, Lexington and Third Avenues between East 57th and East 86th Streets. Organized rings of shoplifters that are targeting high-end boutiques are a key driver of the spike, retailers say. “The organized crime in our district is our biggest issue,” said Matthew Bauer, president of Madison Avenue BID. “And the fact that there is a market for the goods that are being stolen from stores.” That’s why Madison Avenue BID is banding together with business improvement districts in Midtown to send a message to Albany, pleading with Hochul and other New York politicians to help them grapple with the mentally ill, drug addicts and cheeky criminals who increasingly have been given free rein. “The deterioration of public safety and the quality of life in Midtown Manhattan needs and deserves a solution,” the Midtown BID Coalition said in a letter to Gov. Hochul in late March on the eve of budget discussions. High-profile violent attacks on visitors and New Yorkers alike — some resulting in murder — along with reports of ‘smash and grab’ thefts in the city’s tony neighborhoods and commuters being harassed by mentally ill people have created an image of the Big Apple as a lawless city, business groups say. A March survey by the Partnership for New York City found that “personal safety” is the number one concern for New York metro area employees in deciding to return to their offices in Manhattan. In Times Square, crime was up 20% in January 2022 from last year’s already dismal figures, according to the Times Square Alliance. And while the number of people passing through the crossroads of the world reached 320,000 the last weekend in March — a “solid improvement” according to Alliance president Tom Harris — it is still down 19% from the same period in 2019. “There is certainly a perception that the city is not as safe as it used to be and that there are no consequences for minor offenses,” said Times Square Alliance president Tom Harris, who is part of the newly formed Midtown BID Coalition whose sole focus is addressing public safety. Midtown South, the 14-block stretch from 30th to 44th streets between Ninth and Madison Avenues, has been slapped with a 51% surge in crime this year versus the same period a year ago, according to police data. The real number is probably even higher, as most people don’t take the time to file a police report when they are “whacked on the head, rushing to the subway,” said Barbara Blair, president of the Garment District Alliance. Indeed, 16 of the local business group’s 70 employees over the past year have been physically assaulted during their commutes to its offices at 209 West 38th Street — including vice president Jerry Scupp, who along with his adult son was attacked by a disturbed man as they were walking to the A train on their way home, according to Blair. “A man started screaming and began violently attacking my son from behind, hitting him on the head and back,” Scrupp told The Post. “I jumped in between them and he began flailing at me and yelling.” The spike has been fueled by ex-Mayor Bill de Blasio’s decision at the height of the pandemic to house 1,200 of the 10,000 homeless New Yorkers who had previously been living in congregate housing in the Garment District’s 53 hotels, according to the Alliance. The Garment District has a disproportionate number of methadone and needle exchange clinics because it’s largely zoned for manufacturing even though most of the sewing factories have long since moved out of the neighborhood. “The drug dealers moved in,” and have never left, Blair said. “Because of how the city used this neighborhood during the pandemic we have been disproportionately affected,” Blair added. “What I see is public disorder, people running around and intimidating others and that is what is frightening to people.” On the Upper East Side, stores are lately closing earlier, Bauer said. Before the pandemic more were staying open until 7 pm, but now many are closing at 6 pm. In February, the RealReal boutique on Madison Ave. was hit when a group of seven crooks stole jewelry, watches and handbags worth about $500,000. Last year, incidents included an attack on the flagship Givenchy store in which a group of thieves used a hammer to smash the door open and grab $80,000 worth of handbags and clothing. “There is considerable security presence in the stores now,” Bauer said. “Lights are left on overnight and stores are investing in a film that goes over a window glass to make it resistant to being bashed.”