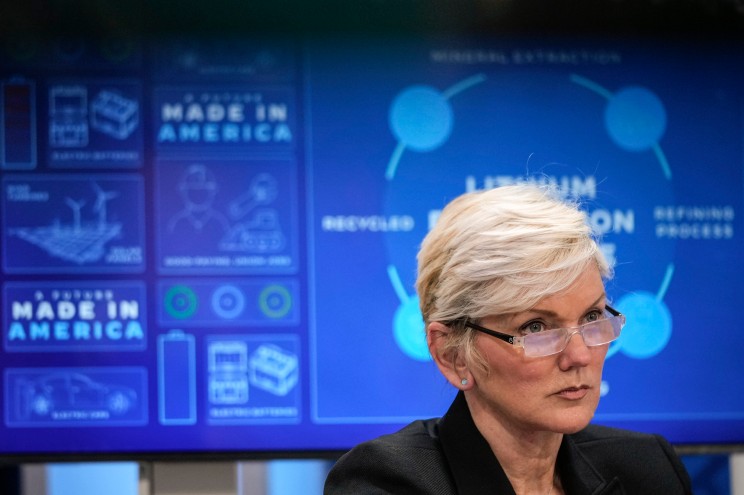 The International Energy Agency’s 31 member countries agreed Tuesday to release 60 million barrels of oil from their strategic reserves — half of that from the US — “to send a strong message to oil markets” that supplies won’t fall short after the Russian invasion of Ukraine. The board of the Paris-based IEA made the decision at an extraordinary meeting of energy ministers chaired by US Energy Secretary Jennifer Granholm. She said in a statement that President Biden approved a commitment of 30 million barrels and that the US is ready to “take additional measures” if needed. The group’s “decision reflects our common commitment to address significant market and supply disruptions related to President Putin’s war on Ukraine,” Granholm said. Russia plays an outsized role in global energy markets as the third-largest oil producer. Its exports of 5 million barrels of crude per day amount to about 12% of the global oil trade. Some 60% goes to Europe and another 20% to China. So far, US and European sanctions have not barred oil or gas exports and have included exceptions for transactions to pay for oil and gas. Western leaders are reluctant to restrict Russian oil exports at a time when global energy markets are tight and high prices are fueling inflation in developed economies. But the invasion has still shaken markets worldwide. On Tuesday, oil prices soared, with US benchmark crude surpassing $106 per barrel — the highest price since 2014. “The situation in energy markets is very serious and demands our full attention,” IEA executive director Fatih Birol said. “Global energy security is under threat, putting the world economy at risk during a fragile stage of the recovery.” Last month, the IEA said global demand for oil was 100.2 million barrels a day in the fourth quarter of 2021. Demand is expected to grow to an average of 100.6 million barrels a day this year, as restrictions to limit the spread of COVID-19 are eased, the IEA said. Besides the US, other members of the organization include Germany, France, the UK, Japan and Canada. IEA members hold emergency stockpiles of 1.5 billion barrels of oil. The release amounts to 4% of stockpiles, or roughly 2 million barrels per day for 30 days. It’s only the fourth time in history that the IEA has done a coordinated drawdown since the reserves were established in the wake of the Arab oil embargo in 1974. From the US perspective, the price of crude oil determines a big portion of what drivers pay to fill up their cars with gasoline. The national average for a gallon of gas is $3.61, which is 26 cents more than a month ago and 90 cents more than a year ago, according to motor club federation AAA. In 2021, the US imported roughly 245 million barrels of crude oil and petroleum products from Russia — a one-year increase of 24% over 2020. Nearly 8% of U.S. imports of crude oil and petroleum products that year came from Russia, based on data from the statistical arm of the US Energy Department. In November, Biden announced a release of 50 million barrels of oil in coordination with other energy-importing countries, but the measure had only a fleeting impact on oil prices, which have continued to rise. Stewart Glickman, an oil analyst for CFRA Research, said the latest release from the SPR would only be partially helpful, because most of the reserves are light oil, while the US largely imports a heavier grade of oil from Russia. “Refiners plan around a certain blend of crudes, so you can’t always just swap out one for another easily,” he said. Granholm stressed the need to invest in renewable energy as a way to reduce dependence on Russian oil and natural gas. To that end, Democratic Sen. Joe Manchin of West Virginia called on Biden and the oil industry to take immediate action “up to and including banning crude oil imports from Russia.” “If there was ever a time to be energy independent, it is now,” said Manchin, who supports fossil fuels such as coal and natural gas that are his crucial to his energy-producing state.