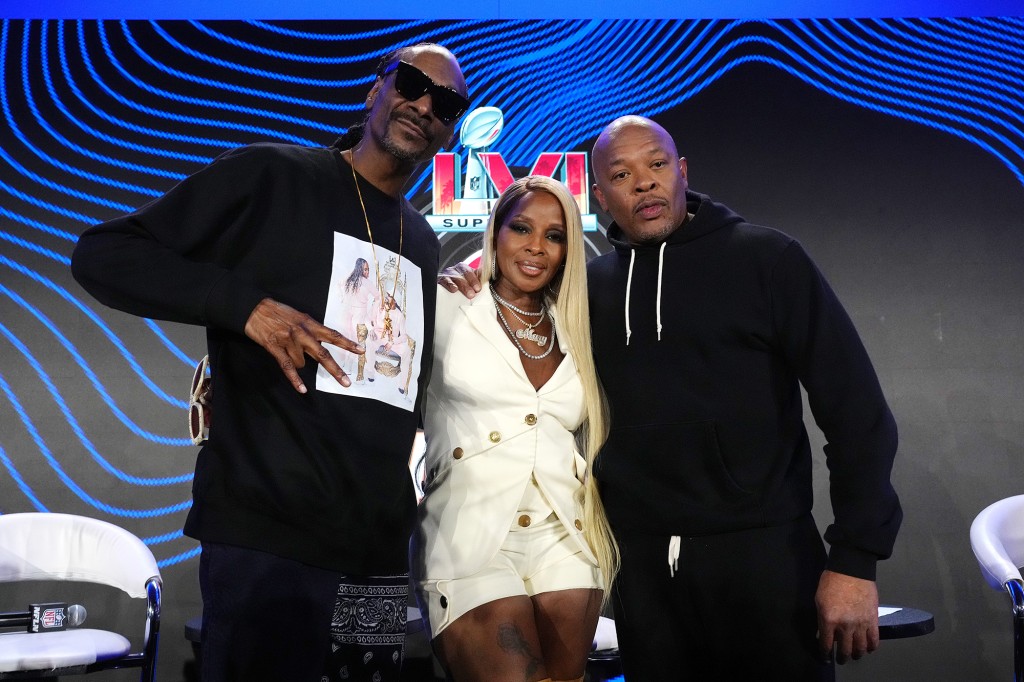 Too soon? Super Bowl 2022 halftime show artists Dr. Dre and Snoop Dogg made a wardrobe malfunction jab at their fellow performers, who include Eminem, Mary J. Blige and Kendrick Lamar. The hip-hop legends representing all corners of the country are performing at SoFi Stadium in Los Angeles on Feb. 13. They came together on Thursday for a press conference for the big event. The Aftermath Records founder, 56, told reporters at the conference that he advised Snoop, 50, and Eminem, 49, to keep their pants on. “There won’t be any wardrobe malfunctions,” Snoop said, perhaps alluding to the infamous Janet Jackson “Nipplegate” of 2004. “I need you to keep your shirt on, alright?” Eminem quipped to Snoop. “I may not,” he simply replied. “I had to talk Snoop and Em out of pulling their penises out,” Dre interjected. Cue nervous laughter from the crowd. Dre quickly moved on, saying, “The show will be f–king incredible.” The Beats businessman continued, “Not trying to be egotistical, but who else could do this show here in LA? Who else could perform at the halftime show other than these amazing artists put together?” In preparation for the big game, Pepsi released a teaser trailer featuring the rap musicians entitled, “The Call.” The fivesome came together against a backdrop of their most iconic music videos. On the same day as the press conference, headlines surfaced that Snoop is currently being accused of sexual assault. A woman who used to work as a dancer for the Long Beach, California, native accused him and his associate Bishop Don “Magic” Juan of sexually assaulting her in 2013. She filed a lawsuit under the pseudonym Jane Doe. Snoop posted an image to his Instagram and labeled the woman as a “gold digger.” In other Super Bowl news, food at the SoFi Stadium for game day is allegedly “trash” and doesn’t look too appetizing, according to fans who have previously dined there. Twitter user Arash Markazi shared a video of the food items at the sports arena, including dishes such as a cheeseburger sub, beef barbacoa burritos, “street” hot dogs, pepperoni pizza, “tsunami” tater tots with “eel sauce” and a lobster salad. Rock bands Bon Jovi and Red Hot Chili Peppers were even roped in to help with the Super Bowl prep. According to TMZ, recordings of both groups’ music are being played at the Stadium to throw off people passing by so they don’t hear the sounds of the Fab Five’s 12-minute set.