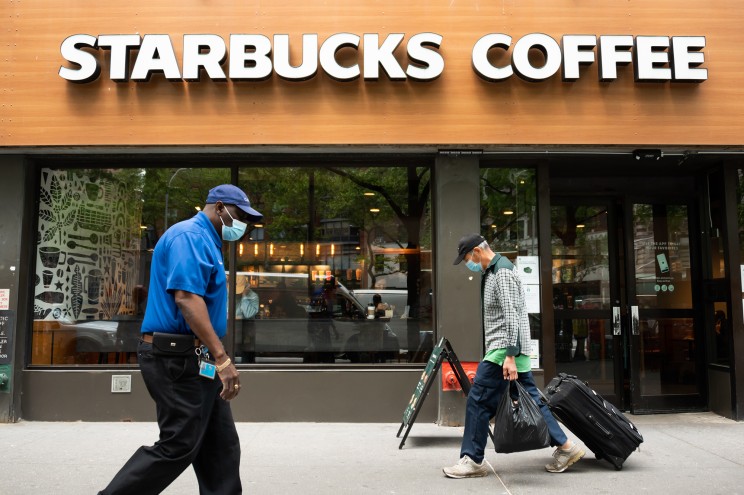 Employees at four New York City-area Starbucks locations have filed petitions to form unions, joining a nationwide labor push that the coffeehouse chain has fiercely opposed. Workers from Starbucks stores in Manhattan, Brooklyn and Long Island submitted petitions with the National Labor Relations Board to organize through Workers Unite, an affiliate of the Service Employees International Union. The same group represents workers at two Buffalo-area Starbucks locations that have formed unions. The locations impacted by the filings include Starbucks’ flagship “Reserve Roastery” in the Meatpacking District, with employees at both the site’s public-facing storefront and its manufacturing plant seeking NLRB recognition. Workers United said the petitions cover about 170 Starbucks employees. “As a proud partner of 7 years, I am seeing a shift – Starbucks is no longer the partner-first, progressive company that I joined in 2015,” said Mark Mao, an employee at the NYC Reserve Roastery. “Safety lapses, dwindling management support, stagnant wages and benefits are some of the symptoms of a company losing touch with the voices of hourly partners,” Mao claimed. “By forming a union, we allow those voices to be heard again, and become the people-oriented business Starbucks claims to be,” he said. The NYC-area employees are seeking to hold a unionization vote in early March. Representatives for the National Labor Relations Board did not immediately return a request for comment. Starbucks spokesperson Reggie Borges said the company had no comment on the NYC-area petitions, other than to say that “our leaders have previously stated that we respect our partners rights to organize and will bargain in good faith.” The push by New York Starbucks employees signals mounting pressure on the Seattle-based chain. Executives oppose the unionization effort, arguing they have been proactive in addressing employee concerns and already offer exceptional benefits. Starbucks Workers United shared letters from employees at each of the four locations on the group’s Twitter account. The letters, addressed to Starbucks CEO Kevin Johnson, detail a desire for what they said was improved working conditions and more input over how Starbucks responds to challenges facing its employees. A total of 72 Starbucks stores have filed to unionize across 21 states, according to Workers United. The movement has gained momentum since December, when a Buffalo-area store became the first Starbucks-owned store to unionize in company history. Still, that’s a small number when considering Starbucks has nearly 9,000 company-owned outlets across the US. The labor movement among Starbucks’ New York-area employees drew support from 76 local politicians, organizers said, including Democratic Reps. Jerry Nadler and Alexandria Ocasio-Cortez, who urged the company to “respect their right to organize.” “New York City is a union town and union-busting has no place here,” the lawmakers said. Starbucks has faced allegations of union-busting toward employees who sought to organize in other states. Earlier this week, the company fired seven employees at a store in Memphis, Tennessee, who said they were attempting to form a union. Starbucks denied the firings were in retaliation over the labor push, asserting that the employees violated company policies related to store security and health guidelines, saying they used the store after-hours to conduct TV interviews and also weren’t wearing masks.