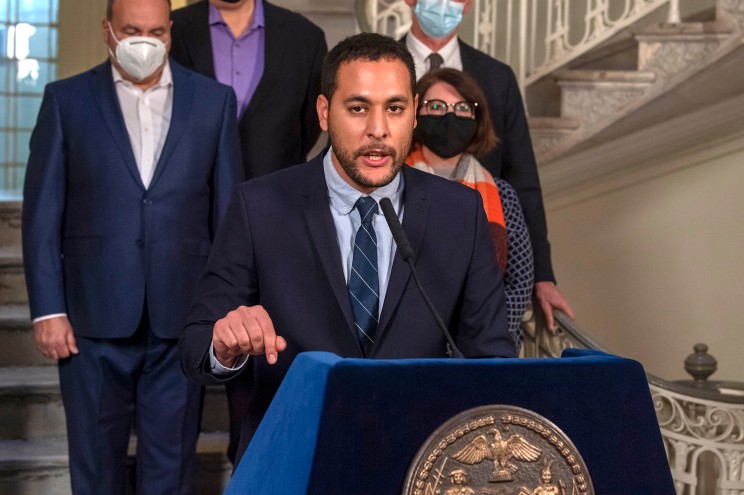 A bill set to be introduced in the New York City Council would bar on-demand grocery apps from advertising 15-minute delivery times, citing threats to worker and pedestrian safety, The Post has learned. The forthcoming legislation from Councilman Christopher Marte comes in response to startups like Gorillas, Getir, Fridge No More and Jokr that have set up shop in the city over the past year, wooing New Yorkers with lightning fast delivery speeds and deep discounts on groceries and toiletries. While the apps’ turnaround times are convenient for New Yorkers, they incentivize delivery workers on e-bikes and scooters to break traffic laws and put themselves and pedestrians in danger, Marte told The Post. The downtown progressive said his bill would bar companies from advertising 15-minute delivery times and is set to be introduced within weeks as part of a broader package of bills addressing on-demand grocery apps. “We don’t think that should be legal,” Marte said in reference to companies advertising 15 minute delivery times. “We’re going to have a number of pieces of legislation to bring a lot more oversight and accountability.” Marte’s bill comes after several reports of accidents and fatalities linked to e-bikes, which were connected to at least 20 deaths in 2020. In one horrific example, a 54-year-old Queens woman was hit by an e-bike in April 2021 and later died from her injuries. And earlier this month, a 66-year-old e-bike rider died after being “doored” by a taxi on 11th Avenue near Hudson yards, Streetsblog reported. Marte argues that giving workers more time to make deliveries will save the lives of both delivery workers and pedestrians by putting e-bike riders under less pressure to break traffic laws. He said he’s also pushing for legislation that would give delivery workers more worker protections and better health benefits, but did not provide details.