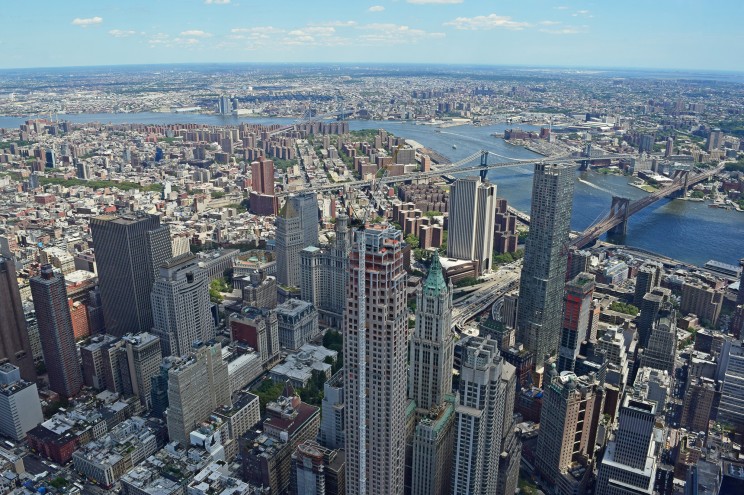 Commercial real estate in New York City kept 92% of its value despite economic turbulence caused by the COVID-19 pandemic, according to the mayor’s office. Mayor Eric Adams presented a preliminary budget for fiscal year 2022-2023 which estimated that the value of commercial properties in the city is around $301 billion. Before the COVID-19 pandemic hit in March 2020, the city assessed the estimated value of commercial properties at around $326 billion, according to Crain’s New York Business. That means the latest assessment represents 92.3% of the estimate from January 2020 — weeks before the onset of the pandemic. This year’s estimate is 11.7% higher compared to fiscal year 2021-2022, when the total assessed value of commercial properties in the five boroughs stood at $269 billion. The Adams administration is banking on higher property taxes from both commercial and residential real estate to fuel the city’s budget for this fiscal year. The city assessed its commercial and residential real estate property values at $1.4 trillion — a 2.1% increase compared to before the pandemic. The mayor is projecting $726 million in tax revenue growth to the increase in property taxes, which he calls “our single largest revenue source.” The city’s latest estimate shows that office properties, which remain largely vacant as employees continue to tele-work, lost 7% of their pre-pandemic value — dropping from $172 billion to around $160 billion, according to Crain’s. Retail properties have also seen their values decline from $63.8 billion to $56.2 billion — a reduction of 11.9%. Hotel properties dropped from $32.7 billion to $26.3 billion, a 19.6% decline, according to city estimates. While real estate values recovered, the pandemic has nonetheless taken a devastating toll on the Big Apple’s economy. The city lost a record 900,000 jobs to the pandemic in 2020, when the spread of the coronavirus prompted local government to institute lockdowns. Key economic engines such as tourism, hospitality, and entertainment were crippled as local governments banned indoor gatherings in public spaces. Small businesses suffered tremendously as office-based employees who normally commuted into the city and patronized delis, news stands, bodegas, and eateries stayed home and worked remotely. Adams is urging company CEOs to bring their employees back into the office as soon as possible. The city appeared on track to rebound after the mass vaccination drive sent case numbers dropping precipitously last year, but the Omicron variant which emerged in the fall sabotaged whatever hopes there were of a quick comeback. According to the Federal Reserve Bank of New York, the city is still 350,000 jobs — or 9.6% of all jobs — shy of its pre-pandemic peak.