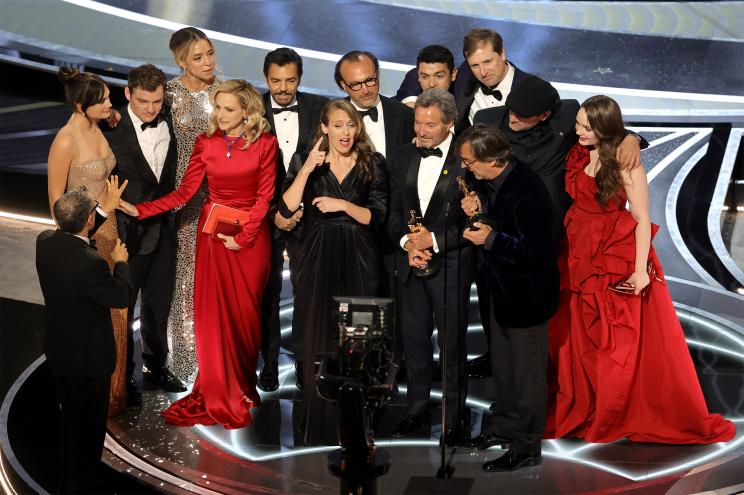 Three-time Oscar-winner “CODA” will make its way back into movie theaters with open captions after snagging the coveted Best Picture win at the 2022 Oscars on Sunday. “CODA,” which stars a predominantly deaf cast, will play in more than 600 locations starting this Friday, April 1, for a limited engagement, and all showings will have open captions to be accessible to the deaf and hard-of-hearing communities, according to Deadline. “As our industry recognizes ‘CODA’ with its highest honor, we’re excited once again to bring this moving film to theaters so that audiences can share in the experience of watching it together,” said Erica Anderson, an Apple Original Films and Apple+ executive. “CODA” began its run at the Sundance Film Festival in 2021, where it won several prizes including the Grand Jury Prize. Apple picked up the film for $25 million and it has since received several accolades from ceremonies including the Critics’ Choice Awards, the BAFTAs and the SAG Awards before culminating in its Academy Awards win. Coming back to theaters could give the film the recognition that supporters say it deserves as the film’s historic win was overshadowed by the now-infamous altercation between face-slapping Will Smith and presenter Chris Rock. “We have a great thing with this movie, and Will Smith’s slap superseded it,” said deaf actor Bob Hiltermann. “I was looking at the news for information about ‘CODA’ and all I saw everywhere was the slap.” The film also won Best Actor in a Supporting Role for Troy Kotsur and the Best Adapted Screenplay statue for Siân Heder. According to new research done by Preply, a service that offers online language classes, there has been a 300% spike in searches for “learning American sign language” and a 600% increase in searches for “learn sign language online free” since the “CODA” Oscars win.