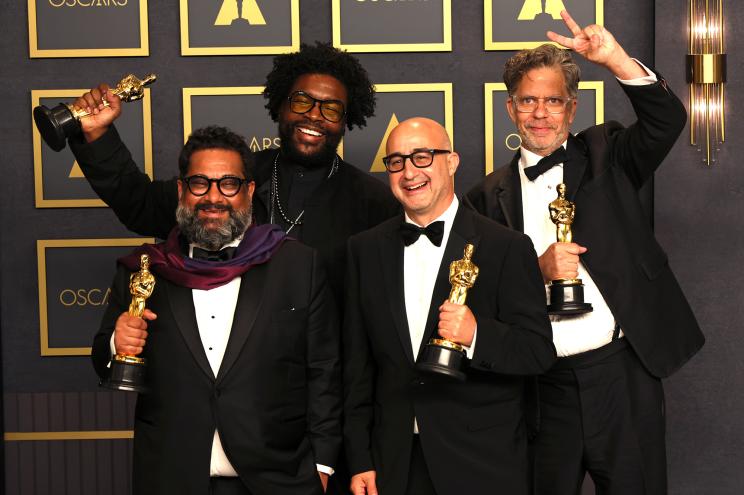 One of the “Summer of Soul” producers, Joseph Patel, is fuming over Chris Rock’s joke about him at Sunday night’s Oscar ceremony. Director Questlove, alongside producers Patel, Robert Fyvolent and David Dinerstein, scored the Oscar for Best Documentary Feature during the show. But their moment was outshined by Will Smith slapping the soul out of Rock, 57, just minutes before the former announced the doc as the winner. As the foursome walked up to accept their statuette, the comedian announced them as “four white guys.” Patel slammed Rock in a lengthy, now-deleted Twitter thread. The producer started to say that he was “angry” with Smith, 53, for having “robbed” the category of its moment and Rock was for the disrespectful joke. He said the introduction seemingly erased his accomplishments as a South Asian-American. Patel also wrote that he was “still sort of processing” the altercation between Smith and Rock. “Once we realized the Chris Rock/Will Smith interaction wasn’t a bit, everything got turned upside down. Everyone was still trying to make sense of it when Chris persevered and started to read the nominees,” he said. “I think what Will did was selfish. It robbed the category of its moment. It robbed the other excellent and amazing films of their moment to be acknowledged in what was a STRONG year for docs. And it robbed ‘Summer of Soul’ and our team of our moment. Of a loud, enthusiastic cheer for a celebrated film,” the filmmaker added. Patel noted that he and his collaborators “were in shock walking to the stage — not because of winning but because we, too, were still trying to make sense of what happened. Then Will hugs [Questlove] and daps me up. I didn’t even know it was happening in the moment. Still in shock.” While Patel stated that Questlove handled the controversial moment with ease, he didn’t fully hear and comprehend what Rock was saying as they walked up to the podium. “What I didn’t hear in that moment walking to stage but was told of afterwards is what Chris Rock said when reading our name from the winner’s card — the winner is Summer of Soul…Ahmir ‘Questlove’ Thompson and…four white guys.’ WHAT IN THE ACTUAL F—?????” Patel tweet-screamed. “The reason that makes me SO SO VERY ANGRY is because I was so proud to be one of a handful of South Asians to have ever won an Oscar in the history of the award. I was ecstatic that I was the third South Asian to win that night — after [Riz Ahmed] and Aneil Karia won earlier in the night for ‘The Long Goodbye.’ Three South Asians winning on the same night — that’s never happened before! And it’s meaningful! It’s history!” he continued in his rant. He also said that Rock’s joke was also inaccurate as there were three producers, not four. Questlove directed the feature while Patel, Fyvolent and Dinerstein produced. Even though Patel declared that he “can take a joke” but “not in that moment.” He went on, “What a sh–ty, disrespectful thing to do. AND HERE’S THE THING…. It wasn’t that Chris Rock was under stress. He made the same joke the night before on stage at the Roots Jam!” “[I’m] angry at Will Smith. Angry at Chris Rock. Angry for me. Angry for Ahmir. Angry for my fellow filmmakers.” He concluded his thoughts by exclaiming that he won’t be able to watch the ceremony again. “Thank you, Chris — you absolute f—ing d–k.” “What both Will AND Chris did really stained what should have been a beautiful moment for us,” Patel said.