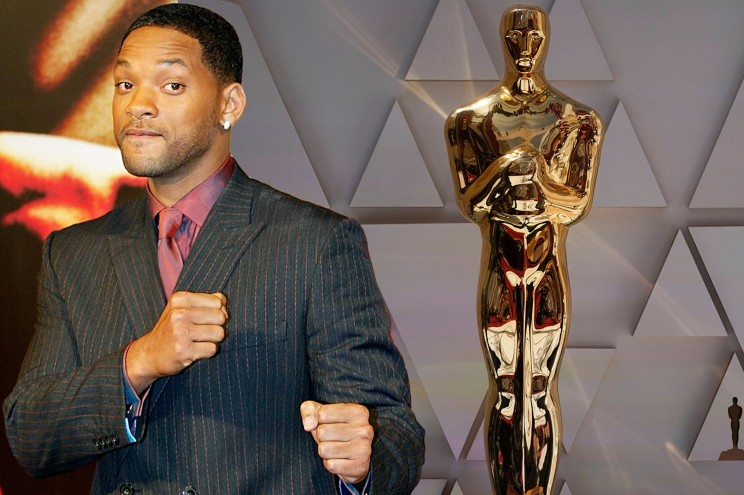 Sunday night’s Oscars improved over last year’s historically low ratings — but cratered in civility and grace. Strike another death knell for the once-almighty ratings grabber. Tinseltown likes to think of itself as the center of the moral and pop-culture universe, but c’mon — that was ridiculous, another slap in the face for what’s supposed to be (but rarely is) “Hollywood’s Shining Moment,” with television along for the ride on a gravy train that’s gone off the rails and crashed into a wall of indifference. Sunday night’s Oscarcast on ABC is the second-lowest-rated Oscars ever with around 14 million viewers — up from last year’s abysmal 10.4 million viewing audience (akin to an episode of “Yellowstone” on cable’s Paramount Network). The mediocre ratings bump will instill in nervous network execs the hope that this dinosaur can be saved from extinction — instead of seeing the obvious writing on the (video) wall that it’s too late for that. This year’s annual self-congratulatory festivities were produced by Will Packer, who can thank another Will (Smith) for perhaps the most controversial moment in the ceremony’s 93-year history … if only anyone was watching it live on ABC, instead of scurrying to their computers late Sunday night/ Monday morning to see what all the social-media ruckus was about. There’s no doubt that Smith’s wtf? open-palmed smack of Oscars presenter Chris Rock after Rock joked about Jada Pinkett Smith’s alopecia (“Jada, can’t wait for ‘GI Jane 2′”) will be parsed and analyzed under a sociological microscope — accompanied by the requisite hand-wringing — until next year’s Academy Awards. see also There’s a chance that Smith could be fined by the FCC for his profanity-laced tirade launched at Rock once he sat back down. It was bleeped out by ABC but heard elsewhere around the world, so that’s another stick of kindling to throw onto the firestorm. It’s unlikely Smith will be fined — even more unlikely that, as has been speculated, he’ll be forced to forfeit his Oscar by the academy — but still. It’s a talker. But talkers, however spontaneous, won’t reverse the traditional-TV course of this ship. It’s sailed and needs to dock on another platform. If the powers-that-be had any moxie in a business that’s built on entertainment, for crying out loud, they would move the 2023 Oscars to an online-only home in a digital reality in which broadcast television, already deadened by too many self-congratulatory awards shows, disappears just a bit more each season. Believe me, more people will watch online than sit in front of their TV sets. It’s a sign of the times. And, while they’re at it, lop an hour or two off the three-or-more hour, watching-paint-dry proceedings. The ostensible glitz and glamour of Tinseltown’s Biggest Night go only so far once you get past the “who are you wearing?” red carpet moments, and that’s only from a fashion perspective, if you even care, and it’s in the pre-show — another unnecessary, little-watched time-suck. see also It all vanishes once the laborious telecast gets underway and you realize you were sold a bill of goods in all the run-up hype that “things will be different this year.” They won’t be. I think we know that by now. Bring back fan-favorite Billy Crystal? Won’t matter in the long run. That’s not to say that Oscars producers haven’t tried to change it up for a telecast that, once upon a time, snared over 40 million viewers in those salad days when it finished behind only the Super Bowl in TV’s annual ratings scorecard. This year, there were three hosts — Amy Schumer, Wanda Sykes and Regina Hall. Eight awards were cut from the live show to goose the momentum. Neither “innovation” did the trick to stanch the plodding. Sunday night’s Oscarcast was the longest it’s been in four years, when it ran nearly 40 minutes into overtime. Did no one get the memo? And then there were the aesthetic insults. Did we really need to see Amy Schumer as Spiderman — a blaring-shill moment for ABC’s corporate parent, Disney, which also owns Marvel Entertainment? And if you get Beyonce to perform, you show her live — not pre-taped vis-a-vis her performance of “Be Alive.” Samuel L. Jackson won an honorary Oscar … but was relegated to awkwardly watching his “Pulp Fiction” co-stars Uma Thurman and John Travolta re-create their iconic dance from the movie — since his acceptance speech was cut from the telecast along with fellow honorees Liv Ullman, Danny Glover and Elaine May. Big mistake. C’mon people, get a clue. It’s time to change how and where we watch the Oscars.