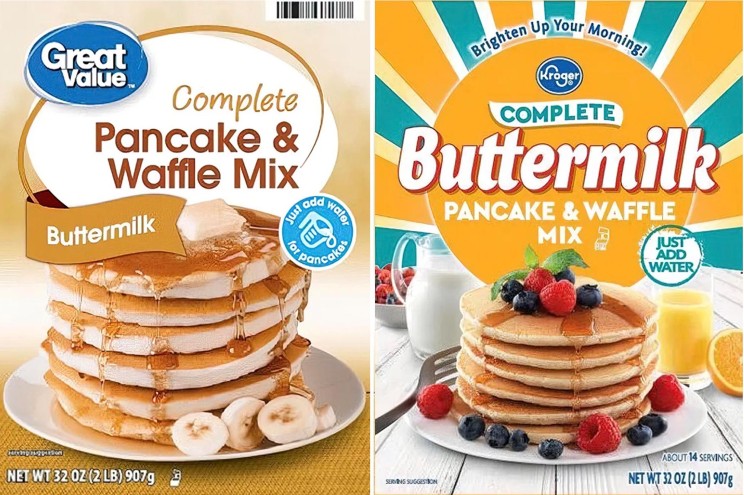 Pancake and waffle mix sold at Walmart and Kroger stores nationwide are being recalled after officials say it was contaminated with a foreign material. Over the weekend, Continental Mills issued two separate recalls for several lots of its Buttermilk Pancake & Waffle Mix after “fragments from a cable used to clear the processing line were discovered in a limited amount of product,” according to the recall notices posted by the Food and Drug Administration . On Friday, the FDA posted the company’s first recall which included two lots of Kroger Buttermilk Pancake & Waffle Mix with best by dates of Sept. 1, 2023, and Sept. 2, 2023. The product was distributed to Kroger stores in more than a dozen states. Within 24 hours, Continental Mills issued the same recall for a single lot of Great Value Buttermilk Pancake & Waffle Mix with the best by date of Sept. 1, 2023. The affected lot was distributed to Walmart stores nationwide, according to the notice. In both cases, officials haven’t received any reported injuries related to the recalled pancake or waffle mix. Consumers have not yet reported that their product was contaminated at all, according to the recall notices. “Food Safety is the highest priority for Continental Mills and the company is acting swiftly for the safety of consumers,” Continental Mills said in a statement. The company said it’s working with federal officials and retailers to make sure the affected product “is removed from the marketplace immediately.” The company is urging consumers to dispose of or return the product to stores for a replacement or refund.