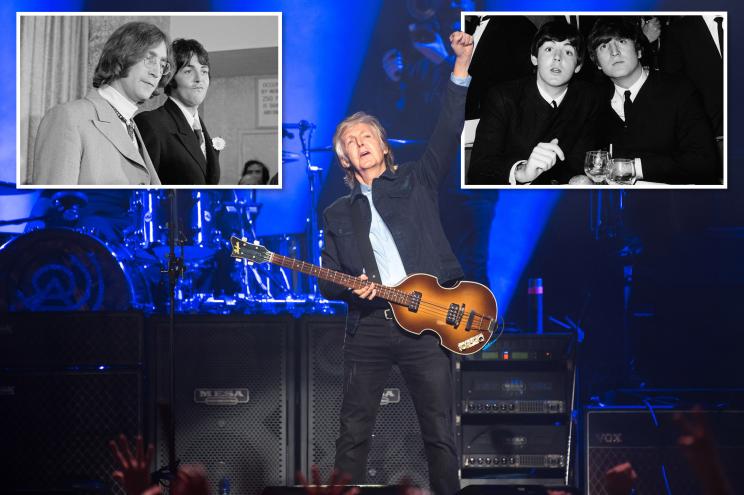 Paul McCartney brought John Lennon back from the grave with a little help from his friend, director Peter Jackson. The 79-year-old rock legend took the stage at the Spokane Arena for the first show of his “Get Back” tour on Thursday evening. And a very special guest joined him for a duet on the song “I’ve Got A Feeling.” Footage of Lennon, who died in 1980 at the age of 40, from Jackson’s Disney+ documentary “The Beatles: Get Back” was presented on a big screen while the British rocker sang. The two crooned alongside each other to kick off the new tour. “So, Peter Jackson, the director of the ‘Get Back’ film, he texts me one day. And he says, ‘We can extract John’s voice. He can sing with you live,’” McCartney told the roaring crowd after the song finished. Other iconic hits he sang included: “Getting Better,” “You Never Give Me Your Money” and “She Came in Through the Bathroom Window.” The concert was The Beatles frontman’s first one since the coronavirus pandemic began two years ago. “They said, ‘Get back,’ and we got back. And it feels cool,” he also said. “You’ll have to give me a moment to myself, just to let me take this in.” The tour is set to run until June and he will next be seen in cities such as Seattle and Oakland, California, in the next few days. see also Here is the full list of McCartney’s 2022 tour dates: 4/28 Spokane, WA – Spokane Arena 5/2 Seattle – Climate Pledge Arena 5/3 Seattle – Climate Pledge Arena 5/6 Oakland, CA – Oakland Arena 5/13 Inglewood, CA – SoFi Stadium 5/17 Fort Worth, TX – Dickies Arena 5/21 Winston Salem, NC – Truist Field 5/25 Hollywood, FL – Hard Rock Live 5/28 Orlando, FL – Camping World Stadium 5/31 Knoxville, TN – Thompson-Boling Arena 6/4 Syracuse, NY – Carrier Dome 6/7 Boston – Fenway Park 6/12 Baltimore – Orioles Park 6/16 East Rutherford, NJ – MetLife Stadium Ahead of launching his new tour, the father of five made sure to make a heartfelt plea to Starbucks, asking them to stop charging extra for plant-based milks. He called out the pricey coffee chain’s CEO Kevin Johnson last month in an open letter he penned with the People for the Ethical Treatment of Animals. “My friends at PETA are campaigning for this,” he wrote in the memo, first published on Billboard.com. “I sincerely hope that for the future of the planet and animal welfare you are able to implement this policy.” He continued, “It recently came to my attention that Starbucks in the USA has an extra charge for plant-based milks as opposed to cow’s milk.” “I must say this surprised me,” he added, noting that Starbucks stores in his native land, the United Kingdom, do not have a charge for funky milk alternatives. “I would like to politely request that you consider this policy also in Starbucks USA.”