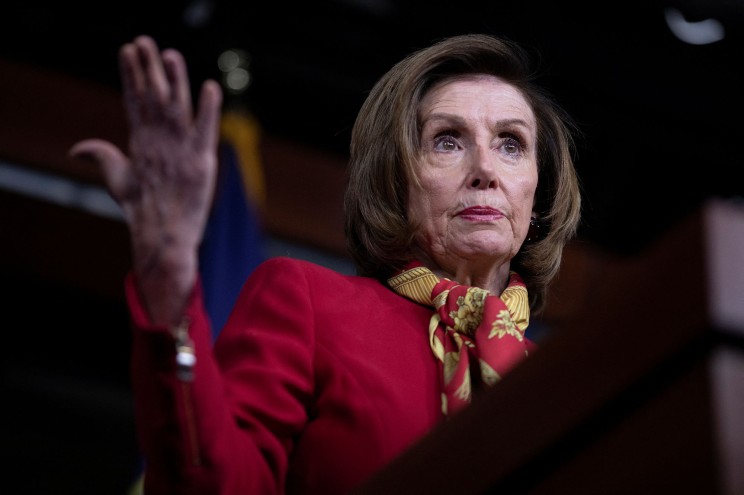 Elizabeth Warren’s bipartisan bill banning stock trading on Capitol Hill has a little-noticed provision that could save lawmakers millions of dollars worth of capital gains taxes — and Nancy Pelosi is signaling she likes it. On the face of it, the forthcoming Ban on Congressional Stock Ownership Act from Warren (D-Mass.) and Sen. Steve Daines (R-Mont.) would be the most stringent proposed crackdown on stock trading to date. It wouldn’t just ban members of Congress and their spouses from trading stocks and require them to put their assets in a blind trust — like another popular Democratic proposal. It also would require them to sell off all their individual stock holdings altogether, sources familiar with the bill told The Post. Nevertheless, according to a less-noticed provision in the bill, lawmakers who convert their stocks would also receive a massive sweetener: They would be able convert their stocks into broad-based investment funds or Treasury bonds while deferring any capital gains taxes until they sell off the new assets — and if they die before selling the assets, the taxes would be waived altogether. House Speaker Nancy Pelosi (D-Calif.) — who previously dismissed concerns about stock trading by members of Congress but made a dramatic about-face in February when she said she was open to a ban — could save millions of dollars from the Warren-Daines capital gains exemption since her husband frequently trades shares of big tech companies. During a press conference last week, Pelosi was quick to point out that a similar capital gains deferral exists for the executive branch, where officials are already banned from owning individual stocks. “As you know, in the executive branch, when they divest of their stock, they don’t pay capital gains,” Pelosi said. “So that’s an interesting feature.” The tax savings from the bill for members of Congress could even potentially outweigh any profits they would have made from trading individual stock, according to tax analyst and Columbia Business School professor Robert Willens — giving backers the dual advantage of looking virtuous while also making money. “It’s an absolutely reasonable thing to consider whether the advantages of tax deferral — if not permanent tax elimination if you die with the property — outweigh the advantages,” Willens told The Post. “This in essence confines them to very safe and placid investments while also looking like they’re occupying the moral high ground.” In Willens’ view, the tax deferral would essentially give Pelosi and other stock-picking members of Congress “interest free loans from the government.” Pelosi has not endorsed the Warren-Daines bill or any other proposed legislation dealing with stock trading by members of Congress. In the executive branch, capital gains deferrals have helped wealthy cabinet members save millions. When Hank Paulson quit as CEO of Goldman Sachs in 2006 to become George W. Bush’s Treasury Secretary, he saved as much as $200 million in capital gains taxes, according to an Economist analysis. And Rex Tillerson, who left his job as Exxon-Mobil CEO to join the Trump administration as Secretary of State, deferred an estimated $13 million in taxes through the rule even though he was later fired, Vox reported. While polls indicate that a ban on Congressional stock trading would be broadly popular with the public, some in Washington, D.C. say that the capital gains measure would be politically untenable. “The mood and climate is not conducive to giving members of congress a cap gains break,” a source close to Pelosi told The Post. “Congressional members would love it but optically it can’t happen.” Craig Holman, an ethics lobbyist with progressive group Public Citizen, supports the Warren-Daines bill, but admits that some lawmakers would “make a killing” from the capital gains deferral. Under Warren’s bill, a senator who was forced to sell off $1 million worth of Google stock would typically have to pay capital gains taxes at a rate of more than 20% before they could reinvest the proceeds. But that senator could reinvest the entire $1 million directly into a broad-based investment fund or Treasury bond and would only have to pay taxes on the investment if they sell it before they die under the Warren-Daines bill, which is also backed by Sens. Marsha Blackburn (R-Tenn.) and Debbie Stabenow (D-Mich.) Nonetheless, Holman argues that the deferral is fair. “If we’re going to mandate that someone is going to have to sell all their stock and go into a mutual fund or something else, it’s totally appropriate that they would not have to pay taxes on that,” Holman told The Post. A D.C. source that supports the Warren-Daines bill argued that its intention is to prevent conflicts of interest — not to punish people for being wealthy before being elected to Congress. “We don’t want to be deterring successful people from running for office,” the source said. Other insiders speculate that Pelosi’s support for a stock trading ban is less about her own pocketbook and more about apathy as she eyes the exit ahead of a potential GOP House sweep in 2022. Sources close to Pelosi told The Post that she could potentially run for another term, win and then step down shortly into the term — before any Congressional stock trading rules would likely take effect. “This is very much an après moi, le déluge situation,” James Lucier, managing director at Capital Alpha, a Washington-based policy research outfit said, referring to the idea of not caring about what happens after someone’s gone. “Now that Pelosi is on her way out, she may be fine letting it happen.” Pelosi’s office did not respond to a request for comment. Another stock trading ban proposal by Jon Ossoff (D-Ga.) and Mark Kelly (D-Ariz) would give lawmakers the option of putting their assets in a blind trust rather than selling them altogether. The bill does not mention capital gains deferrals for lawmakers who sell their stock and Ossoff’s office did not answer questions about whether he would support such a measure.