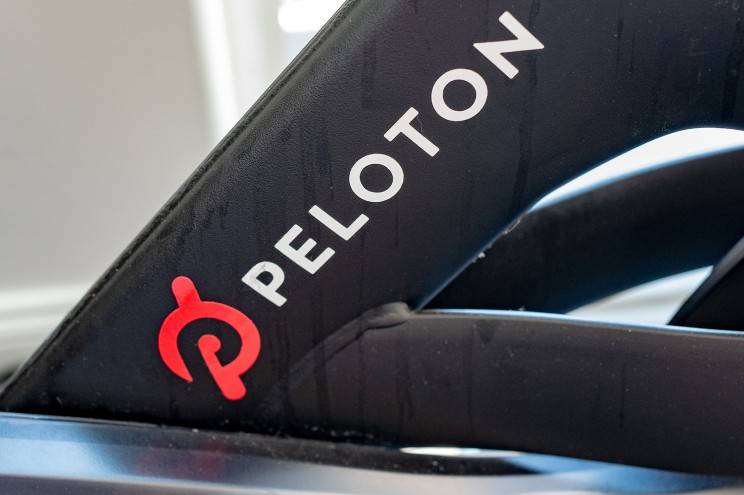 Peloton’s stock surged 28% as rumors swirled about potential takeover bids from Amazon, Nike or Apple. Shares of the beleaguered fitness firm were trading up $6.79 at $31.39 shortly after the market opened on Monday morning. The surge comes after The Wall Street Journal reported late Friday that Peloton was drawing potential takeover interest from Amazon. The Financial Times reported the same day that both Amazon and Nike were interested in buying the company. Both publications said no sale was imminent. Other observers have speculated that Apple could also consider buying Peloton in order to boost its health and fitness business. “With media reports swirling that Peloton could be up for sale with Amazon and Nike potential suitors, we would be shocked if Apple is not aggressively involved in this potential deal process,” Wedbush Securities managing director Dan Ives wrote in a Sunday investor note shared with The Post. “Acquiring Peloton would be a major strategic coup and catalyze the company’s aggressive health and fitness initiatives.” Ives estimated that Peloton would likely sell for between $12 billion and $15 billion. The company currently has a market capitalization of around $8 billion after soaring close to $50 billion last year amid a lockdown-era sales boom. The company’s shares tanked in late 2020 and early 2021 as growth slowed and Peloton was stuck with a glut of inventory. The speculation about a sale comes two weeks after Peloton activist investor Blackwells Capital sent a scathing letter to the company’s board of directors calling for CEO John Foley to be fired and for the company to explore a sale. Yet any leadership shakeup or potential sale would have to receive the blessing of Foley and the rest of the company’s management team, who collectively control about 80% of the company’s voting shares, according to the most recently available securities filings. “It’s hard to fire yourself,” one Peloton insider quipped to The Post. The insider speculated that Foley — who recently shelled out $55 million for a compound in the Hamptons — could be holding out for a “Golden Parachute” offer that would give him a huge payout in exchange for agreeing to leave or sell the company. Foley has sold off about $120 million of Peloton shares since the company’s September 2019 IPO. Most of the sales came during Peloton’s pandemic boom when the shares were worth more than $110 each, securities filings show. Other executives also have sold off shares worth a total of about $380 million, according to the filings. “This also makes me wonder if part of their longterm plan was to sell off all their shares when it was high and the accept the Golden Parachute later,” the insider griped. Monday’s stock rally also comes as Peloton prepares to report quarterly earnings on Tuesday. Peloton did not immediately respond to a request for comment.