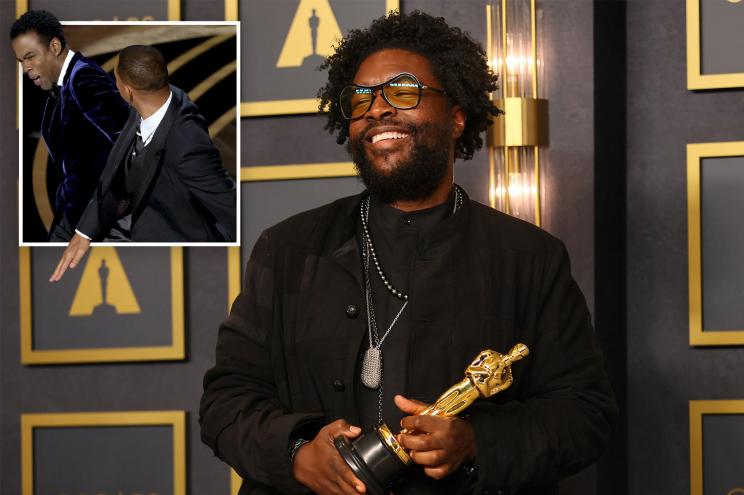 It was supposed to be a magical evening for Questlove at the 2022 Academy Awards on Sunday night. But the now-Oscar-winning Roots drummer’s moment was overshadowed by Will Smith smacking presenter Chris Rock’s face just moments before his win for Best Documentary Feature for “Summer of Soul (…Or, When the Revolution Could Not Be Televised).” Questlove now says he had no idea the altercation between the two men had even occurred because was practicing Transcendental Meditation at the time to get into the zone before the winner was announced. “When the commercial break was happening, I was just in my [space],” first-time director Questlove told Jimmy Fallon on Monday’s “The Tonight Show.” “So when I opened my eyes, I didn’t realize — why is everyone so quiet? Like, I literally was not present for that whole entire moment,” explained the 51-year-old musician, whose group is the house band on Fallon’s chat show. Questlove’s win was announced by a shaken Rock, 57, immediately following the incident. “As I’m walking to the stage, I’m kind of putting two and two together, and I realized that that was a real moment, like, maybe three seconds before I spoke words,” the filmmaker added. “I was not present at all. I was just in a blank space.” A source told Page Six Monday that Questlove and his producers — Joseph Patel, Robert Fyvolent and David Dinerstein — were incredibly excited to win the honor, but found the whole ordeal “odd.” “What can one say? The air was taken out of the room by everyone, so how can it not affect the moment?” the source said. “I think everyone was stunned. It was a stunning moment. … It was an odd moment.” Questlove’s documentary took a look at the 1969 Harlem Cultural Festival, which lasted for six weeks. The fest’s lineup included icons such as Stevie Wonder, Nina Simone, Sly and the Family Stone, Mahalia Jackson and The 5th Dimension. The 94th Academy Awards’ viral moment kicked off when “King Richard” star Smith — who won the Oscar for Best Actor in a Leading Role later that evening — went up onstage to hit Rock after the latter made a not-so-nice hair joke about his wife, Jada Pinkett Smith. He suggested the “Girls Trip” star was ready to shoot a sequel to the 1997 movie “G.I. Jane,” which starred a bald-headed Demi Moore. After returning to his seat, Will shouted at Rock, “Keep my wife’s name out of your f–king mouth!” Smith subsequently apologized to Rock on Monday via Instagram, writing: “Violence in all of its forms is poisonous and destructive. My behavior at last night’s Academy Awards was unacceptable and inexcusable.”