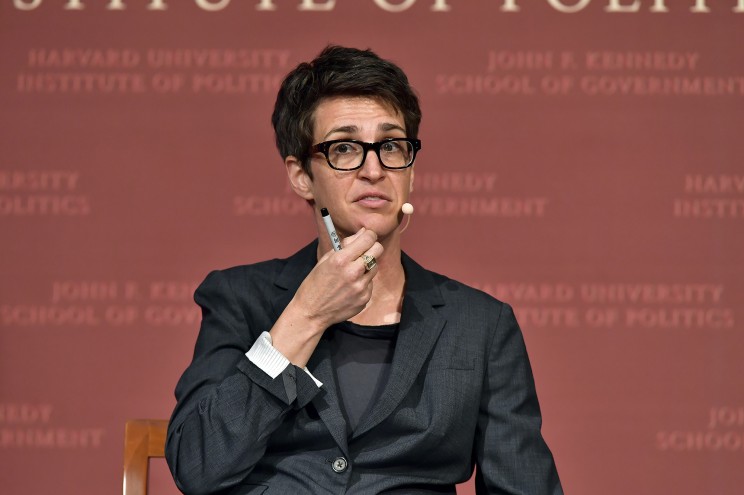 Rachel Maddow’s absence from MSNBC’s primetime lineup is costing the channel viewers. The network’s marquee 9 p.m. program lost nearly 30% of its audience in the key 25-54 demographic on Monday, the second day of Maddow’s weeks-long hiatus, according to the latest Nielsen figures. The episode garnered an average of 201,000 viewers in the key demo — down 29% compared to the Monday of the prior week, when Maddow was still hosting. Its total viewership for the evening was 1,636,000 — far below the 2.78 million who tuned in to Fox News’ “Hannity” during that same hour, according to Nielsen. But MSNBC can take solace in the fact that it is pummeling rival CNN, which was rocked by last week’s shocking resignation of top executive Jeff Zucker. Monday’s Maddow-less hour still beat Anderson Cooper in the coveted 25-54 demo, as “AC360,” which was expanded to a two-hour broadcast to fill the void left by Chris Cuomo, drew just 176,000 viewers. Overall, MSNBC’s 9 p.m. offering on Monday drew more than twice the number of viewers as CNN’s Cooper, which managed just 615,000 people in its audience. Monday’s MSNBC show was helmed by Ali Velshi, who will be among several of the left-leaning cable channel’s personalities who are scheduled to fill in for Maddow on a rotational basis. The Monday program’s viewership in the key demographic was also down 16% compared to the same period last month. The Post has sought comment from MSNBC. Maddow’s star power is key to the network’s primetime lineup. “The Rachel Maddow Show” generates nearly 1 million viewers more than bookend programs hosted by Chris Hayes and Lawrence O’Donnell. Last week, Maddow confirmed reports that she planned to step aside from hosting duties for several weeks while she works on a movie project with Ben Stiller. The host, who recently signed a $30 million-per-year contract with the Comcast-owned cable outfit, hinted at further absences down the line. The anchor said she will return for major news events, including President Biden’s State of the Union address on March 1. She plans to reassume full-time hosting duties at the show in April. She will serve as an executive producer on the upcoming film adaptation of her podcast “Bag Man,” which chronicles the downfall of disgraced Vice President Spiro Agnew in the early 1970s. Maddow will be working with Stiller, who will direct the movie version, and produce the project alongside “Saturday Night Live” creator Lorne Michaels. A paperback version of her book on Agnew is also set for release in the coming weeks.