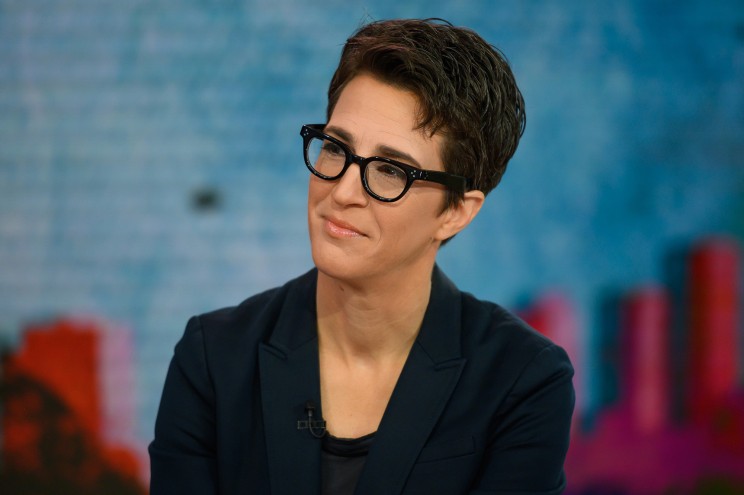 Rachel Maddow reportedly will go on hiatus from her prime time talk show on MSNBC to focus on movie and podcast projects, including a film directed by Ben Stiller. Maddow told staffers at the left-leaning, Comcast-owned network that she will step aside for a few weeks to devote time to her side projects, Business Insider reported on Monday. She is expected to announce the move to viewers during Monday night’s broadcast. Maddow will executive produce a Focus Features movie based on her book and podcast, “Bag Man,” about a political bribery scandal. Her absence is expected to last a few weeks, after which she will return to host her nightly hour-long talk show. Maddow will also contribute to the network’s coverage of major live events. Last year, Maddow signed a lucrative $30 million-per-year contract through 2024 to stay at MSNBC. The terms of the deal allowed Maddow to scale back her nightly schedule so she could work on other media ventures including streaming and podcasting. Maddow is said to be eyeing the creation of another podcast as well as other projects in collaboration with Phil Griffin, who recently stepped down as president of MSNBC. Maddow’s hiatus comes amid significant changes at the network. Last week, the network announced that longtime business correspondent Stephanie Ruhle would fill Brian Williams’ 11pm nightly time slot and that “Morning Joe” would expand to a four-hour daily broadcast each morning. Williams, the former “NBC Nightly News” anchor who was reassigned to MSNBC after he lied about his war reporting in Iraq, hosted “The 11th Hour” for five years before retiring in December. In October, MSNBC President Rashida Jones said she was still “figuring out” what the network’s prime time lineup would look like once Maddow stepped down. Jones, who was named president of the network last year, just shy of her 40th birthday, said that a major goal for Maddow and MSNBC is finding the best home for the anchor’s content across the company’s portfolio. “We’ve got parts of our business that focus on documentaries, that focus on long form, scripted, unscripted, films, podcasts, audio, all of these things,” the exec told The Information’s virtual WTF Summit. “Part of the process that we are figuring out with Rachel is how do we get exposure on more of those places?” Jones added. “We do know that the work she and the team will put out every day is of high interest.” MSNBC has posted better ratings for its primetime shows than rival CNN, but both networks combined fail to bring in anywhere near the number of viewers who watch Fox News on a nightly basis.