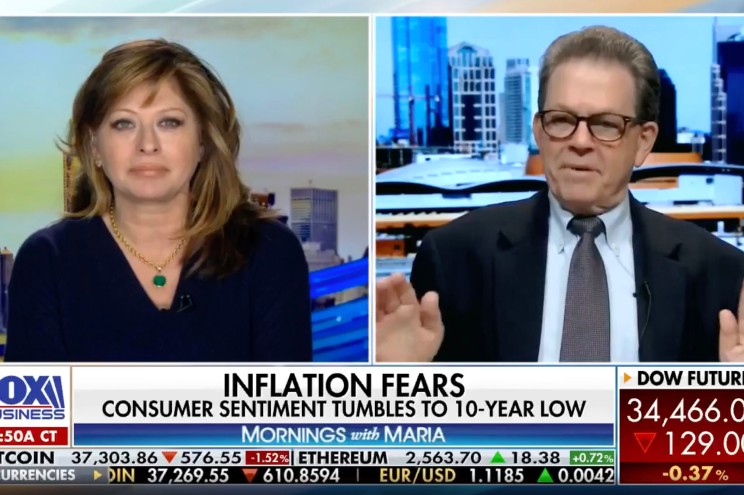 30-year mortgage rates drop slightly as market awaits Fed’s March rate hike: · Interest rates are rising: How to prepare · Fed signals March rate hike – here’s what that means for your wallet Former Reagan economist Art Laffer issued a dire warning for the U.S. economy, arguing on Monday that it is “tipping into a slowdown” and that a recession in 2023 is plausible. Laffer also argued that inflation is “not under control yet” and noted that he is “quite concerned about the next 12 months for the U.S. economy.” Laffer made the comments on “Mornings with Maria” on Monday, three days after it was revealed that a key measure of annual inflation that is closely watched by the Federal Reserve is running at the hottest pace in nearly four decades as widespread supply disruptions, extraordinarily high consumer demand and worker shortages fuel rapidly rising prices. Prices soared by 5.8% in the year through December, according to the personal consumption expenditures price index data released Friday morning, beating out the previous month’s increase of 5.7% to become the fastest inflation pace since 1982 In the one-month period between November and December, prices jumped 0.4% (0.5% when excluding food and energy costs). Excluding the more-volatile measurements of energy and food, prices rose 4.9% in December from the previous year – the highest since September 1983. That measurement is the Fed’s preferred gauge to track inflation; it marks the ninth consecutive month the measure has been above the central bank’s target range of 2%. The inflation spike largely reflected surging energy costs, which rose 29.9% from a year ago, and food costs, which were up 5.7% over that same time period. Services inflation rose by 4.2% in December, and goods inflation increased 8.8% – up from the 8.5% pace a month prior, the data shows. “I think we are at a really precarious position,” Laffer told host Maria Bartiromo on Monday. “I think we might be tipping into a slowdown and if that happens, that would be really bad for the economy.” When speaking about inflation, he pointed to oil prices, noting that there has been “a very sharp rise” last month, following “a very sharp fall” the month before, “but the two together don’t show any improvement in inflation to my way of looking at it.” “And we don’t have any basics coming in that could really do a good job; tax cuts, spending restraint, sound money, all of that is missing, so I am quite concerned about the next 12 months for the U.S. economy,” he continued. Last week, The Federal Reserve signaled it could “soon” raise interest rates for the first time in three years, paving the way for a March liftoff as policymakers seek to keep prices under control and combat the hottest inflation in nearly four decades. Although central bank officials have left rates unchanged since March 2020, they indicated broad support last week during a two-day, policy-setting meeting to begin aggressively normalizing policy, including raising rates amid growing concern over the rapid increase in consumer prices. A rate increase would mark the first since December 2018. Markets have been volatile in anticipation of the rate hikes. For the month, all three of the major averages are down with the Nasdaq fairing the worst off 12%.