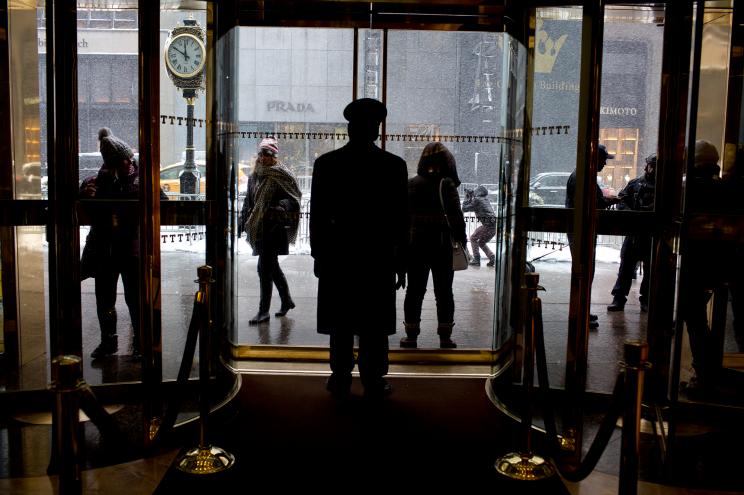 Residents of some of New York City’s most expensive luxury buildings may have to open doors themselves, retrieve their own packages, and take out the trash themselves as doormen, superintendents, porters, and other staffers threaten to strike. The union representing 30,000 employees of buildings owned by real estate property managers Vornado Realty Trust and Related Cos. wants a new collective bargaining agreement in place by April 20, when the current contract expires. The management companies want to slash vacation days, sick leave, and health care costs, prompting the union representing the workers, SEIU 32BJ, to balk, according to Bloomberg News. Tenants and property managers have been told to prepare for the possibility of a work stoppage, which means residents would be responsible for common, everyday tasks like security, trash collection, cleaning, and other services. A building managed by Hoyt & Horn in Brooklyn said that while the company will hire a security guard, residents will have to operate the intercom, screen guests, and accept packages. The head of the union told Bloomberg that while there are several more bargaining sessions scheduled until April 20, “I’m not feeling a lot of confidence.” “This is not a time for moving backwards but a time for moving forward,” the union chief, Kyle Bragg, told Bloomberg. But the representatives for the management team said that progress is being made. “We will continue to work towards reaching a fair contract for both sides by April 20th,” Howard Rothschild, president of the Realty Advisory Board on Labor Relations, which is handling the negotiations, said. The Post has reached out to Vornado and Related seeking comment. According to the union, building workers earn on average $26.45, which translates to $55,000 per year. The annual pay has rise 3.3% per year under their current contract, which was signed in 2018. But cost of living has risen at a pace that has exceeded the annual pay raises. According to the US Bureau of Labor Statistics, costs rose around 5.1% in February compared to the same month last year. The record levels of inflation coupled with surging cost of rent in the city has staffers demanding an increase in pay to keep up. “With inflation right now a lot of people live paycheck to paycheck,” said Crystal Ann Johnson, a 35-year-old who works as a concierge at the Silver Towers in Manhattan. “We are going to get what we deserve.”