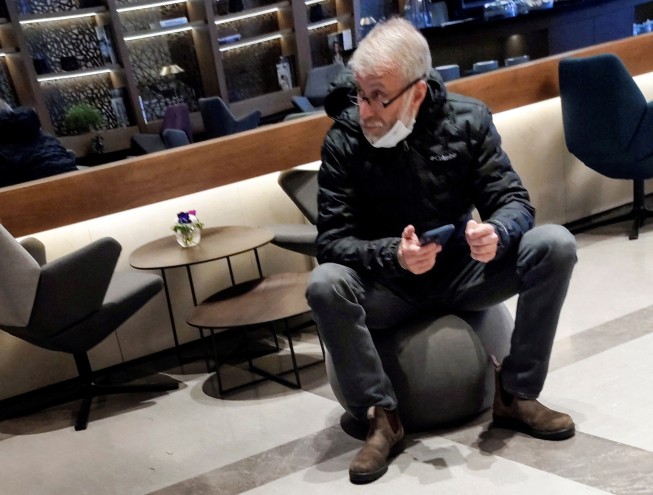 A jet linked to sanctioned Russian oligarch Roman Abramovich landed in Moscow early on Tuesday, after taking off from Istanbul following a brief stop there, FLIGHTRADAR24 data shows. The jet linked to Abramovich, the owner of Britain’s Chelsea soccer club, arrived in Istanbul from Israel on Monday, shortly after he was seen in Tel Aviv’s Ben Gurion airport. Abramovich was among seven Russian billionaires added to a British sanctions list last week to try to isolate President Vladimir Putin over Russia’s invasion of Ukraine. European Union diplomats have embraced a similar move. The Russian oligarch, who also holds Israeli and Portuguese citizenship, has denied having close ties to Putin. A photograph obtained by Reuters showed Abramovich sitting in Tel Aviv airport’s VIP lounge with a face mask pulled down over his chin on Monday. Reuters could not verify whether he boarded the flight to Istanbul from Tel Aviv on Monday or the one from Istanbul to Moscow. Abramovich said last week he was selling the London club, but that sale is now on hold with Chelsea operating under a special government license, and the Premier League board has disqualified him as a club director. A British transport ministry source said on Friday that Britain was searching out helicopters and jets belonging to the sanctioned oligarchs. Multiple properties including opulent yachts worth hundreds of millions of dollars have been seized by authorities in Europe in recent days. Refinitiv ship tracking data showed Abramovich’s $600 million yacht Solaris was underway using engine off the coast of Albania Tuesday morning with the status “awaiting orders”. Its destination was shown as Turkey after taking off from Montenegro but that was removed late on Monday. A person with knowledge of the matter told Reuters the plane used by Abramovich flew into Ben Gurion late on Sunday from Moscow. Flight-tracking website Radarbox said the aircraft, which has the tail number LX-RAY, took off on Monday for Istanbul.