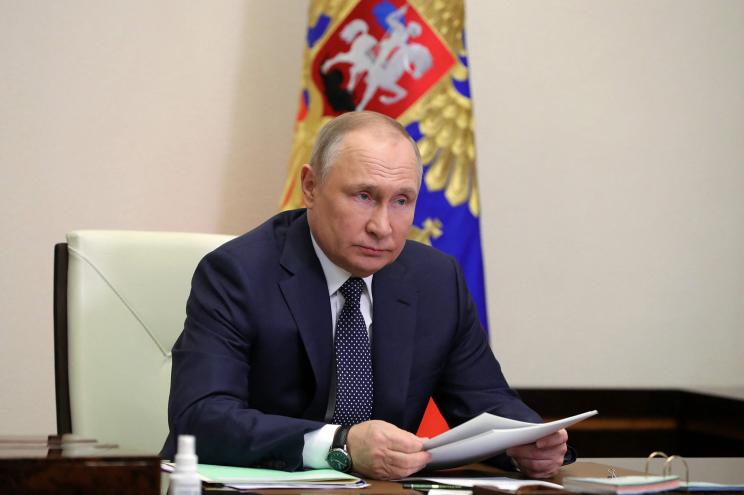 Russia once again avoided a default on its foreign debt as the Kremlin transferred a $447 million bond payment. The payment was processed by JPMorgan, which is Russia’s foreign correspondent bank. It was then transferred to the admin agent, which in this instance is BNY Mellon, sources familiar with the matter told The Post. JPMorgan got the go-ahead from the Biden administration, which imposed sanctions on the Russian economy following President Vladimir Putin’s invasion of Ukraine, before processing the payment, Markets Insider reported. JPMorgan and BNY Mellon both declined to comment when reached by The Post. Holders of Russian bonds will receive $87.5 million in coupons as well as $359 million in principal payments. Since Russia was hit with sanctions, bond payments are taking longer to be processed through the system. This is the second time in as many months that Russia avoided defaulting on its debt. Investors breathed a sigh of relief last month after the Russian government made a $117 million interest payment on its foreign debt. But a much bigger payment comes due April 4 — to the tune of $2.2 billion — and creditors are far less optimistic Russia will pony up this time. “The last payment was a small investment in credibility, but when Russia has to start writing billion-dollar checks it’s a different calculation,” Jay Newman, former Elliott Management portfolio manager and author of “Undermoney,” told The Post. “I don’t think it’s realistic that Russia comes up with the $2.2 billion.” But Putin’s top spokesperson dismissed talk of a Russian default, saying his government has the necessary funds to meet its obligations to creditors. “The fact is that from the very beginning we have said that Russia has all the necessary funds and potential to prevent a default — there can be no defaults,” Kremlin spokesman Dmitry Peskov told Reuters on March 17. “Any default that could arise would have an entirely artificial character.” Newman is not alone in his belief that Russia may fail to make the multibillion payment in April. “I expect a full default of Russian debt,” Robert Kahn of political risk consulting firm Eurasia Group told The Post. “It’s a political — not just economic — issue. Why do they want to pay us back when we’re extraditing them from the economic system?” While Russia owes US banks almost $15 billion, economists don’t expect a default on debt would significantly tank global markets over the long-term. According to the International Monetary Fund, Russia’s relative isolation from the rest of the world makes it “not systemically relevant.”