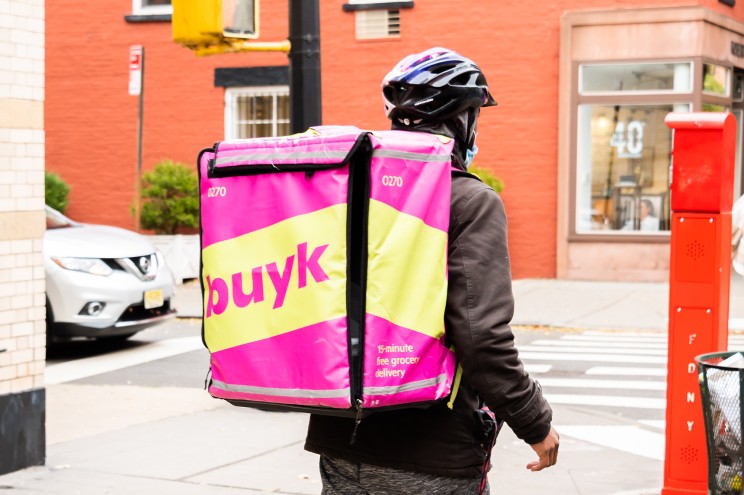 New York employees of a Russian-funded grocery delivery app are nervous that new Biden administration sanctions against Moscow could threaten their jobs, The Post has learned. Buyk, a New York-based startup that was co-founded by two Russian entrepreneurs and recently unveiled a partnership with Grubhub, currently offers 15-minute grocery deliveries in every borough except Staten Island, as well as in Chicago. Since much of Buyk’s funding comes from Russian sources — including a venture capital fund backed by Russia’s largest state-owned bank — some rank-and-file employees say they’re scared that new Biden administration sanctions in retaliation for Russian aggression against Ukraine could threaten the company’s US operations. One Buyk employee told The Post they’re worried that “if the money’s coming from Russia, we aren’t going to be paid.” While Buyk bills itself as an American company, it was founded last year as a spinoff of a St. Petersburg-based delivery startup called Samokat that’s partially controlled by Russian state-owned bank Sberbank. Buyk’s ties to Samokat include using some of the same technology and forwarding US customer support requests to Russia-based workers. Buyk’s initial $46 million fundraising round last year also came from largely Russian sources, including a Sberbank-backed venture capital fund called Fort Ross Ventures. While the White House has not yet included Sberbank in its list of sanctioned entities, Reuters reported on Monday the Moscow-based bank is on the White House’s list of possible targets if Russia escalates its aggression against Ukraine. The Financial Times also reported that sanctions against Sberbank are being kept in reserve as further retaliation for a Russian invasion. “Companies that regularly interact with any of the banks or individuals being considered for sanctions would be wise to keep a close eye on announcements coming out of the White House regarding new sanctions, and should be prepared to halt or wind down those activities,” Caroline Brown, a partner with corporate law firm Crowell & Browning who specializes in sanctions, told The Post. But Buyk’s New York-based CEO, James Walker, downplayed concerns about sanctions in an interview with The Post. “I don’t know that it would have any impact on the business,” Walker said of sanctions against Sberbank, arguing that Buyk is in the process of raising money from US investors and is “an American company with American executives.” But at least one top Buyk executive is Russian and has ties to Sberbank. The company’s retail operations chief, Yana Pesotskaya, worked as the managing director of Sberbank’s food technology portfolio from 2019 to 2021, according to her LinkedIn profile. Walker said that “our founders are Russian, as you know, and when the company started, we were provided mentors within their previous organization,” adding that Buyk is working to make its operations more “standalone” from Samokat regardless of the situation in Ukraine. Walker, who joined Buyk in November after working for Nathan’s Famous and Subway, also said employee paychecks would not be threatened by sanctions on Russia. “Our financing is in such a way that this does not put paychecks at risk in any way, shape or form,” he said. “We’ll make sure that our employees understand that they are in no risk monetarily.”