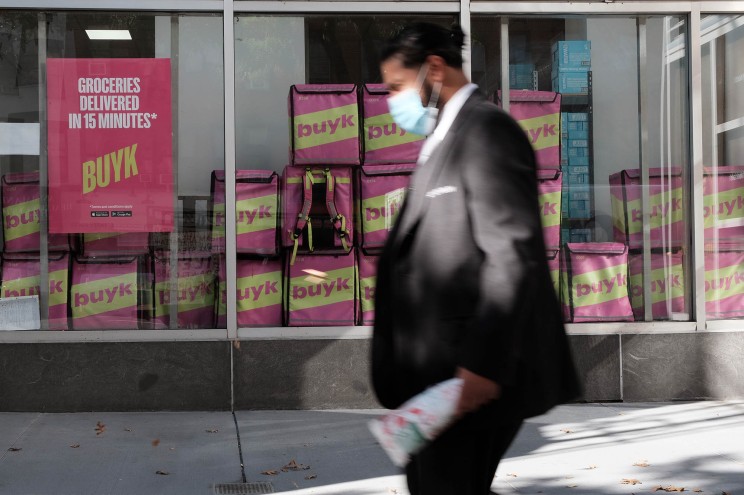 Russia-backed grocery delivery app Buyk, which has been crippled by sanctions, is hunting for American backers in an effort to save itself from bankruptcy, The Post has learned. In a companywide call hours after Buyk suddenly suspended its 15-minute delivery service and furloughed 98% of its employees due to sanctions on Russia, CEO James Walker laid out three options: “We find funds, we find a buyer or we have to liquidate.” “We’re looking for short-term funding, funding that allows us to get the lights back on,” Walker added, according to a recording of the Saturday video call with 650 workers in New York and Chicago that was obtained by The Post. “I will do everything I can to restart the company.” Walker said that he had spoken to executives from competing grocery apps including Gorillas and Gopuff, as well as delivery giants Doordash and Grubhub. It was not immediately clear whether any of those companies, some of which have their own funding issues, would want to bail out Buyk or if other sources of cash could materialize. “There are people who are very interested in buying the company,” Walker insisted, putting on a brave face even as he said furloughed employees should apply for unemployment benefits and consider taking other jobs. One Buyk employee told The Post that Walker “said all the right things” on the call but that it seemed like “too little, too late.” This coming Friday, Buyk employees are supposed to be paid for the two week period leading up to the previous Friday’s suspension. If Buyk doesn’t secure short-term funds or a buyer by then, employees will likely not be paid on time, Walker said. If Buyk then goes into bankruptcy, he said its assets will be sold to pay employees the wages they’re due. Buyk launched in New York last year as a spin-off of Samokat, a popular delivery app in Moscow and St. Petersburg that’s partially controlled by Sberbank, a Russian state-owned bank. Sberbank was among the Russian banks sanctioned by the US and UK last week in retaliation for Vladimir Putin’s brutal invasion of Ukraine. Walker told The Post on Friday that Buyk’s money troubles were due to “sanctions against Russian banks” that have made making transfers from Russia to the US “untenable.” While talking to employees, Walker also blamed “Putin’s unwillingness to let funds leave the borders of Russia.” see also Samokat and Buyk use some of the same technology and Buyk had logistics and support staff based in Russia. Walker said on the call that Buyk’s Russian employees are being “absorbed” by Samokat and that any US relaunch of Buyk would not include Russian employees. Buyk did not immediately respond to a request for comment. The Post was the first outlet to report that Buyk was suspending operations on Friday. “When that New York Post article came out I think last night,” Walker said during Saturday’s meeting, “My wife was like, ‘Ugh, what a terrible article.’” “I said, ‘No it’s a great article,’” Walker continued. “And frankly I don’t care what they have to say about me but it lets people know that Buyk is in trouble and maybe there will be a lifeline out there.”