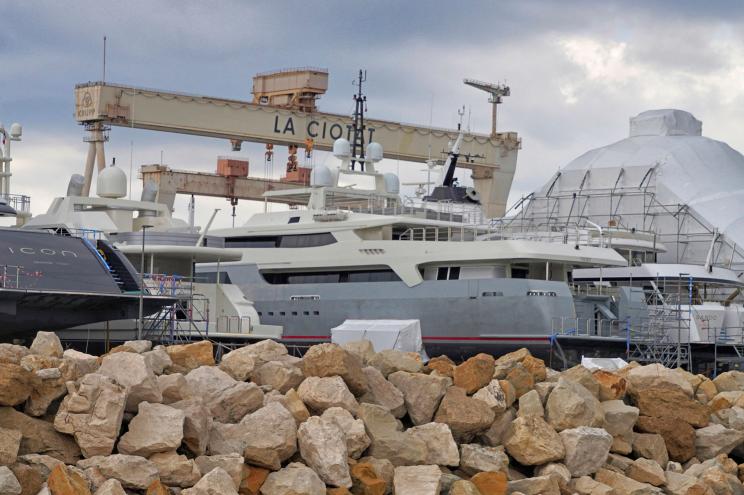 Sanctioned Russian oligarch Roman Abramovich’s fleet of superyachts was revealed Friday to be more extensive than previously known following the discovery of two more luxury vessels in Antigua – both of which now face seizure. British authorities have determined that Abramovich is the owner of the yachts Halo and Garçon, which have been the subject of persistent scrutiny while docked in Antigua as Western nations crackdown on the wealth of rich Russians during the Ukraine invasion. Halo is valued at approximately $38 million, while Garçon is worth about $20 million, according to data from yacht valuation firm VesselsValue. Abramovich’s ownership of the two additional superyachts came to light following an extensive investigation by the Financial Times. A top Antiguan official said the island sought information on Wenham Overseas Limited, an Abramovich-linked and British Virgin Islands-based firm listed as the owner of Halo and Garçon. The firm is on the UK sanctions list. In a letter to Antigua’s government, British officials said an investigation had determined that the “beneficial owner of Wenham Overseas Ltd is Roman Abramovich.” Ronald Sanders, Antigua’s ambassador to the United States, said the country is willing to detain and seize both vessels if it receives a formal request from the UK government. “The only way we can (seize the vessels) is if the British in their mutual legal assistance treaty request establish that this is a person they want because he has committed some crime,” Sanders told Reuters. Abramovich was already known to be the owner of the $600 million Solaris and the $700 million Eclipse, each of which fled to sea last month after the United Kingdom sanctioned the oligarch. Both yachts were last known to be docked in Turkey. The Russian billionaire may also still own a fifth yacht, the $11 million Sussurro, that he first purchased in 1998, according to the FT. While Abramovich reportedly gave the yacht to his ex-wife following their divorce, the outlet said a source with knowledge of his fleet and other documents showed the oligarch was still linked to the vessel through another firm. Abramovich and other oligarchs have scrambled to protect the trappings of their wealth during the increasingly harsh crackdown. The UK sanctions froze Abramovich’s assets and forced him to sell his ownership stake in the Premier League soccer club Chelsea. Meanwhile, reports have surfaced that Abramovich may have been poisoned alongside Ukrainian officials last month while attending peace talks aimed at ending the invasion – a sign that the oligarch’s relationship with Russian President Vladimir Putin has frayed.