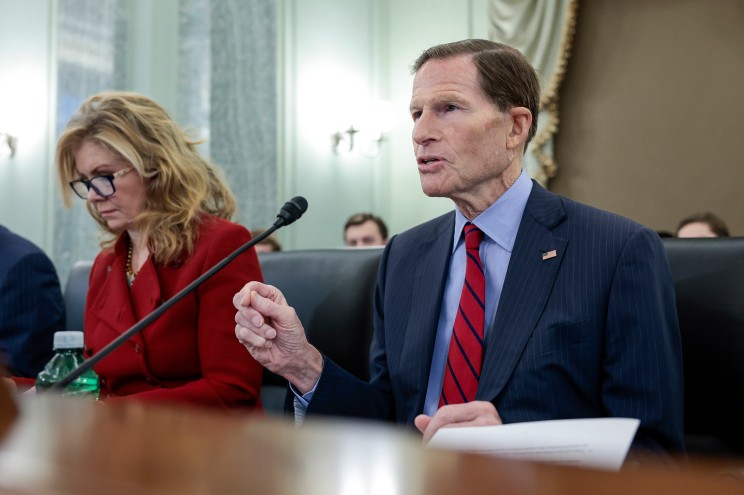 A bipartisan bill that could cost Apple and Google billions of dollars by loosening the companies’ “twin monopolies” over their app stores was advanced by a key Senate committee on Thursday in a landslide vote. The Open App Markets bill would bar Apple and Google from requiring app developers to use the tech giants’ own payments systems, which charge commissions of up to 30% that bring in billions for both companies each year. It would also require the companies to let users download apps from third-party app stores. The bill — which is sponsored by co-sponsored by Sens. Richard Blumenthal (D-CT), Marsha Blackburn (R-TN) and Amy Klobuchar (D-MN) — passed the Senate Judiciary Committee with flying colors in a 21-to-1 vote. “We have let these largest app stores owned and run by digital giants act anti-competitively for far too long,” Klobuchar said. “Apple and Google basically operate twin monopolies in app distribution through their app stores.” Senators who voted to advance the bill included Ted Cruz (R-TX), Dick Durbin (D-IL) and Mike Lee (R-UT). The bill will now advance to the full Senate, where it could receive a vote in the coming months. It also has an accompanying bipartisan House version that was introduced by Reps. Hank Johnson (D-GA) and Ken Buck (R-CO) in August. Backers of the bill argue that it would give a much-needed boost to app developers, which argue that the sky-high payments fees charged by Apple and Google unfairly take money out of their pockets. The fees are at the center of the ongoing legal battle between Fortnite developer Epic Games and have also been slammed by Spotify and Tinder owner Match Group. The only “no” vote on the bill came from Sen. John Cornyn, a Texas Republican, who said that letting users download apps from third parties could pose cybersecurity risks. That echoes arguments made by Apple, which has argued that the bill would “erode” user security. “The Open App Markets Act includes provisions that explicitly mandate alternative app stores and ‘sideloading,’ or the direct installation of software from the internet in a way that circumvents the privacy and security protections Apple has designed,” Apple’s senior government affairs director Timothy Powderly wrote in a letter to Senate Judiciary Committee members ahead of the vote. “These provisions would allow malware, scams, and data-exploitation to proliferate for the first time on Apple’s secure platform.” Google did not immediately respond to a request for comment on the vote but has said it opposes the bill. In January, the Senate Judiciary Committee voted to advance another antitrust bill, the American Innovation and Choice Online Act, which would ban companies like Google, Amazon and Apple from giving their own products a leg up in search results. Ahead of the vote, Apple CEO Tim Cook and Google CEO Sundar Pichai personally called Senators including Cruz to ask them to vote against the bill, which passed in a 16-to-6 vote.