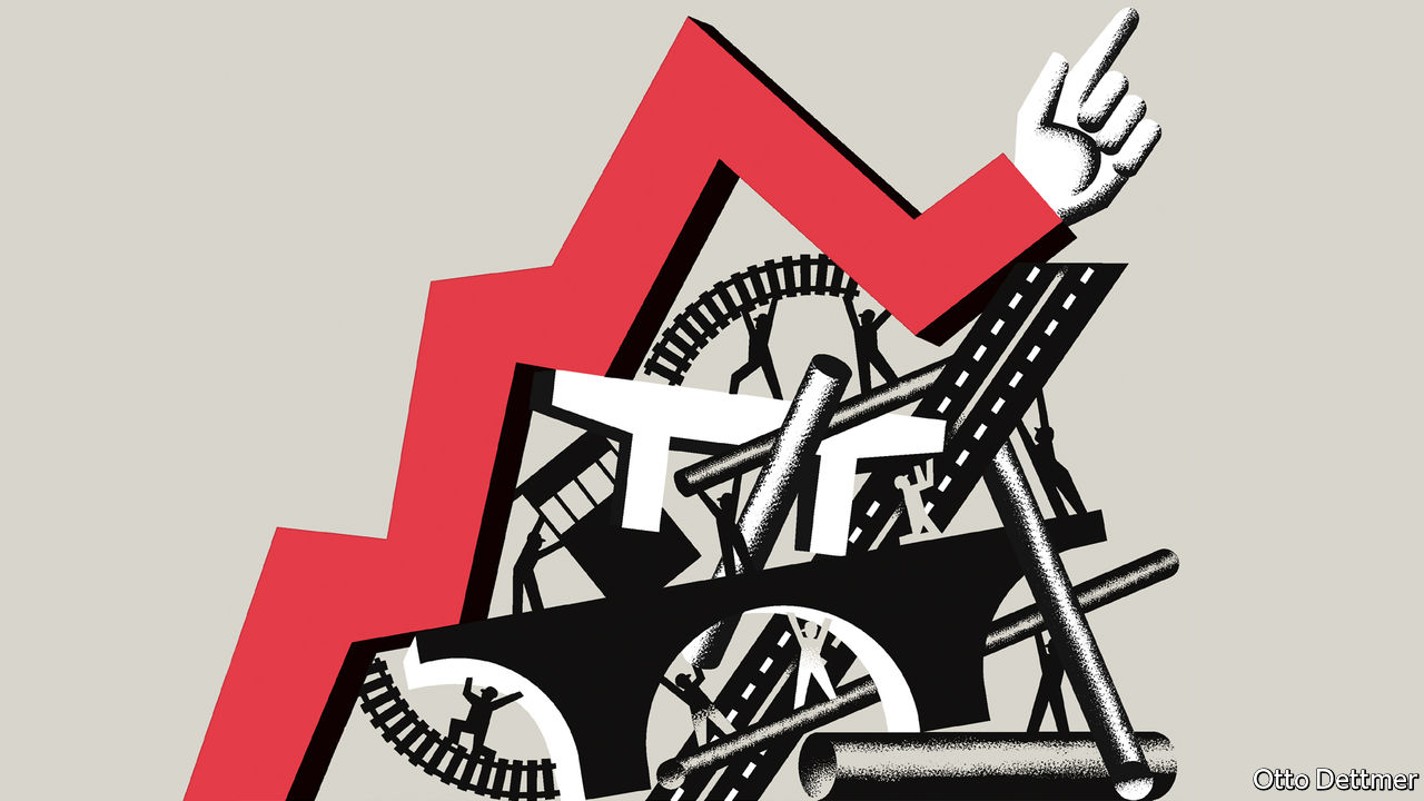 Such stimulus would be less wasteful than a recession Rarely can so much have been used by so few. During Shanghai’s long lockdown, which mercifully eased this week, the city’s impressive infrastructure stood in splendid isolation from most of the citizens it is meant to serve. The metro (all 831km of it) was eerily quiet. The two airports, which handled 120m passengers in 2019, operated at 99% below their normal level. The famous mag-lev train neither magnetised nor levitated. Six-lane highways provided an ocean of road space for handfuls of scooters. China is renowned for creating “ghost cities”: new, sparsely populated districts that gradually come to life as people move into them. Shanghai’s lockdown reversed this process, turning a lively metropolis into something undead. This surreal underuse of existing infrastructure notwithstanding, the government’s best hope for reviving the economy is to add more of it. Much more. Spending on transport, water conservation and renovating old neighbourhoods will be a “strong driving force” for the economy, helping to employ China’s 290m migrant workers, said Li Keqiang, the prime minister, in an emergency teleconference with thousands of local officials on May 25th. The government will also “vigorously” promote 102 “major projects”, listed in the country’s five-year plan, such as flood prevention, ultra-high-voltage power lines and four-lane expressways—including one to a city in Yunnan renamed Shangri-La. If Omicron resurges, recurring lockdowns may prevent China spending its way out of trouble this year. But even if everything goes to plan, a successful stimulus will raise a deeper question. Does China need all that additional infrastructure? Or will the extra spending leave behind superfluous “white elephants”, as undisturbed by human traffic as the airports, roads and railways of locked-down Shanghai? The question is tricky to answer, because infrastructure in China is hard to measure or even define. The definition used by the National Bureau of Statistics (nbs) often leaves out areas such as gas and electricity, as well as social sectors like education and health care. Worse, the official investment figures, designed with central planners in mind, are not consistent with modern national accounting. Nor, owing to shifts in classification and reporting thresholds, are they consistent with themselves over time. As Carsten Holz of the Hong Kong University of Science and Technology once noted, if one intended to make this data “as unusable as possible, one could probably not do a better job than the nbs does”. In a paper published by the World Bank in 2020, Richard Herd nonetheless estimates that China’s stock of infrastructure and government capital rose from 64% of gdp on the eve of the global financial crisis in 2007 to 107% in 2016 (the most recent figure in his paper). This new prominence of infrastructure (and housing) in Chinese investment may help explain the country’s productivity slowdown over the past decade. Another measure by the imf adds up all the investment undertaken by China’s central and local governments. According to this method, the stock of public capital was even larger: 151% of gdp in 2019, among the highest shares in the world. Both of these measures compare the scale of China’s infrastructure with the size of its gdp. This convention makes some sense: a bigger economy needs a larger backbone to support it. Conversely, a small economy, where people are few in number or limited in their means, can fit into a smaller infrastructural frame. If few people can afford cars, flights or smartphones, a country will have less need of roads, airports and 5g towers. According to this logic, infrastructure is a kind of “input” that should be sized according to the scale of production. But gdp is not the only relevant comparison. Indeed, saying that a country’s infrastructure should be kept in proportion to its gdp is tantamount to saying that poor countries should have poor infrastructure. Some common components of infrastructure are more like amenities than inputs to production. A cleaner environment, a faster bus trip or a more comfortable train journey are things people of all income levels can appreciate. On this view, what matters is the amount of infrastructure per person, regardless of their income. Sadly, China’s infrastructure is less impressive when compared with the size of its vast population. For example, it has 120km of motorways per 1m people, compared with 179km in France and 326km in America. And it has 106km of railway per 1m people, compared with 236km in Britain and over 400km in Germany. China’s metro lines are more than 20 times as long as those in France. But China’s population living in cities (of over 500,000 people) is also more than 20 times as large. China also has only 4.4 intensive-care beds for every 100,000 people, according to some estimates, compared with 14 in America—a catastrophic shortage of medical infrastructure that helps explain its lack of tolerance for covid outbreaks. Indeed, there are 37 economies in the imf’s database that have a higher stock of public capital per person than China. Presumably those economies do not think that their extra infrastructure is entirely superfluous. The longer road to Shangri-La Critics of China’s proposed infrastructure stimulus worry that it will crowd out other, more productive forms of spending. But in China’s covid-wracked economy, other spending is unusually weak. Without government help, the level of demand might not be enough to fully employ the country’s labour and capital, including its existing infrastructure. A recession can impose the same kind of compulsory idleness on an economy as a lockdown. The time and energy that China’s workers will devote to extending power networks, waterways and roads to Shangri-La might otherwise be lost to the economy for ever. Wasteful spending is a curse in China. But underspending can be the most elephantine waste of all. ■