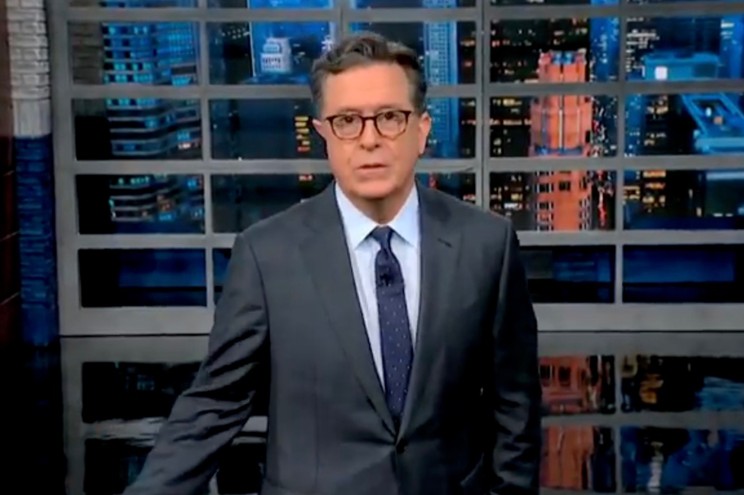 Stephen Colbert was roasted on social media for saying he would be willing to pay more for gas because he can afford an all-electric Tesla. The CBS “Late Show” host gave a monologue on Monday in which he urged Americans to endure higher pas prices as energy costs soar due to the ongoing Russian invasion of Ukraine. “Since the invasion, oil prices have skyrocketed,” Colbert said on his show. “Today, the average gas price in America hit an all-time record high of over $4 per gallon. Okay, that stings, but a clear conscience is worth a buck or two,” said Colbert, whose contract with CBS pays him an annual salary of $15 million per year. “I’m willing to pay. I’m willing to pay $4 a gallon. Hell, I’ll pay $15 a gallon because I drive a Tesla.” The comedian then cracked a joke about the US refusing to buy Russian oil and instead turning to another source. .@StephenAtHome: “Today, the average gas price in America hit an all-time record high of over $4/gallon. OK, that stings, but a clean conscience is worth a buck or two. It’s important. I’m willing to pay $4/gallon. Hell, I’ll pay $15 a gallon b/c I drive a Tesla” pic.twitter.com/my8Ukya5rQ— Tom Elliott (@tomselliott) March 8, 2022 “Take that, Putin! We’re not gonna buy our gas from a war criminal,” Colbert said. “We’re gonna buy it from the good guys, Saudi Arabia!” Colbert, whose net worth has been estimated at $75 million, was blasted for being out of touch with ordinary Americans who must bear the cost of higher gas prices. “‘I don’t mind paying $15 a gallon, cause I drive a Tesla’ is a joke, until you realize that it really defines the disconnect between the mentality of celebrities and the people who have to drive to work everyday in a car that costs less than $50k,” one Twitter user wrote. Another Twitter user wrote: “The majority of his audience probably takes home per year less than what he paid for his Tesla.” But others were sympathetic to Colbert’s joke. One Twitter user wrote: “I’ll gladly pay more for gas to Stop Putin’s Maniacal pursuit to Kill innocent people, take their Homes and Bomb them while trying to leave their country!” West Texas Intermediate crude, the US price benchmark, was trading above $122 per barrel this week after Secretary of State Antony Blinken and other US officials said an import ban was under consideration. Prices have already increased to their highest level since 2008. President Biden announced a ban on Russian energy imports Tuesday after a bipartisan coalition in Congress threatened to force his hand to punish Moscow’s invasion of Ukraine. “This is a step that we’re taking to inflict further pain on Putin, but there will be costs as well here in the United States,” Biden warned as US gas prices hit an all-time high of $4.17 per gallon on average.