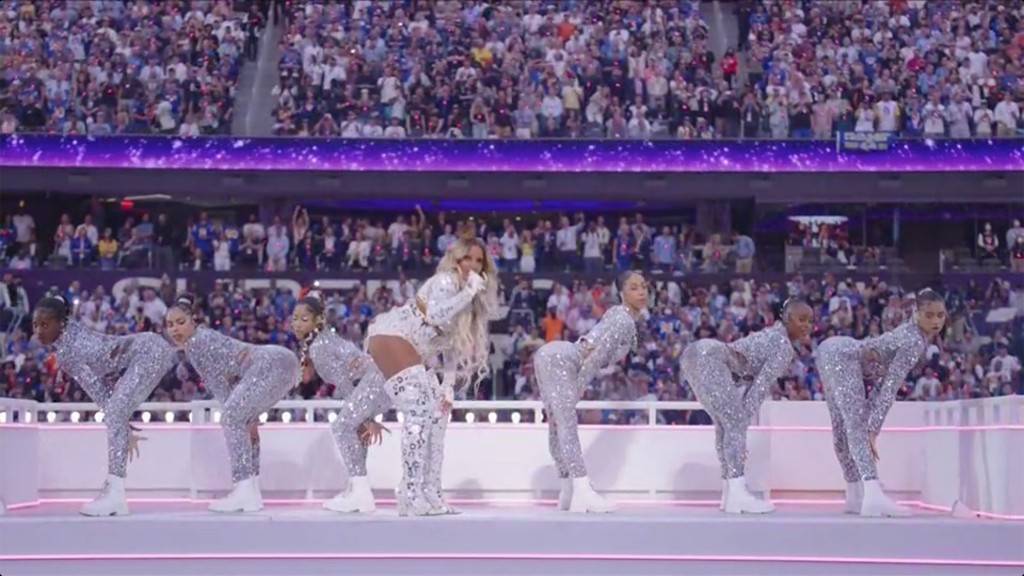 There may have been some big boys battling it out in the game, but it was a night of hip-hop heavyweights — plus, oddly, 50 Cent — at the Super Bowl LVI halftime show. Eminem, Dr. Dre, Snoop Dogg and Kendrick Lamar rocked the stage at the SoFi Stadium in Inglewood, California midway through the showdown between the Los Angeles Rams and the Cincinnati Bengals. And of course, they were joined by the Queen of Hip-Hop Soul herself, Mary J. Blige. The show opened with Dre and Dogg, representing the west coast, and a socially distanced party scene below them on a map of Los Angeles. The iconic rappers then turned the show up-side-down, literally, with an unexpected performance from 50 Cent — who appeared hanging from the platform below the rappers, reminiscent of his old school “In da Club” music video. Blige’s party was next: da Bronx’s Blige sparkled in thigh-high mirrored boots with her hit “Family Affair.” Then, it was back to so-Cal with poet Lamar, before Eminem’s familiar “Lose Yourself” refrain played. Judging by the crowd’s applause, the Detroit rapper may have been the headliner. But Dre’s piano riff echoed louder in Sofi Stadium, as the rapper brought all the performers back together with dancers dressed as inmates performing below them. It was a decidedly different vibe from last year’s halftime show, when The Weeknd was the sole performer on the biggest stage in the game. And this testosterone-heavy affair was a far cry from the diva dance-off between Jennifer Lopez and Shakira in 2020. It was Blige who had the most to gain from being in the Super Bowl spotlight: The 51-year-old singer released her new album, “Good Morning Gorgeous,” on Friday and could certainly use the promotional boost that will surely come from her halftime performance. Blige famously worked with Dr. Dre on one of her big hits, “Family Affair,” and Dre has also collaborated with Eminem, Snoop and Lamar, so clearly the 56-year-old producer, rapper and mogul is the link between all of the halftime performers. The halftime show marked a big night for black artists on the Super Bowl stage, including Grammy-nominated country singer Mickey Guyton, who performed the national anthem before kickoff. The 38-year-old Texas native sang “The Star-Spangled Banner” backed by a choir to represent the diversity of America.