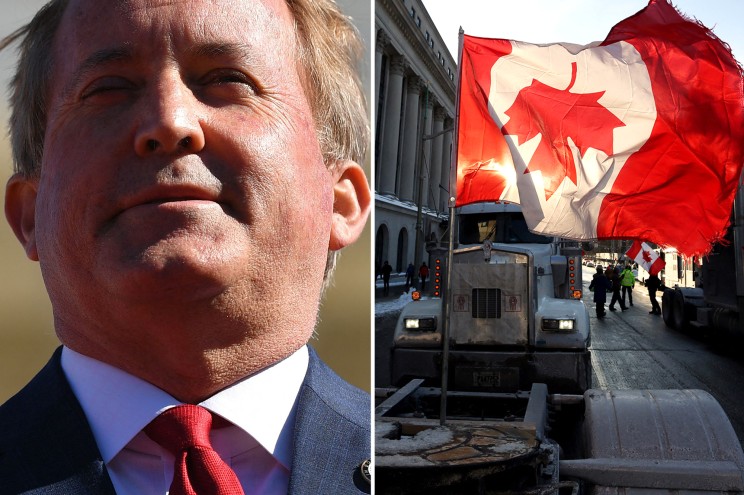 Texas Attorney General Ken Paxton will formally investigate GoFundMe after its decision to shut down a $10 million fundraising campaign for Canadian truckers who oppose COVID-19 vaccine mandates. Paxton’s office will probe whether GoFundMe’s handling of the campaign violated the Texas Deceptive Trade Practices Act, or DTPA, which bars companies from engaging in “false, deceptive, or misleading” practices. “GoFundMe’s response to an anti-mandate, pro-liberty movement should ring alarm bells to anyone using the donation platform and, more broadly, any American wanting to protect their constitutional rights,” Paxton said in a statement. The site’s shutting down of the pro-trucker fundraising page alarmed some conservative groups. “Many Texans donated to this worthy cause,” Paxton added. “I am acting to protect Texas consumers so that they know where their hard-earned money is going, rather than allowing GoFundMe to divert money to another cause without the consent of Texas citizens. I will get to the bottom of this deceitful action.” GoFundMe blocked a campaign that raised nearly $10 million for the so-called “Freedom Convoy,” asserting that discussions with local Canadian officials revealed the fundraiser violated a company policy that “prohibits the promotion of violence and harassment.” The company is refunding all donations. GoFundMe representatives did not immediately return a request for comment on the Texas attorney general’s announcement. Paxton is the latest Republican to explore legal action against GoFundMe over its decision. The attorneys general of West Virginia, Florida and Louisiana each indicated they were scrutinizing whether the platform violated state laws. In a tweet posted before GoFundMe indicated donations would be refunded, Republican Florida Gov. Ron DeSantis accused the company of an effort to “commandeer” the millions of dollars raised for truckers. GoFundMe also faced criticism from billionaire Tesla founder Elon Musk, a vocal backer of the Canadian truckers, who called the company “professional thieves” for withholding the money. The mayor of Ottawa declared a state of emergency earlier this week after protests led by cross-border truckers who oppose a vaccine requirement swarmed Canada’s national capital beginning last month. The protests have continued to expand, with truckers blocking key border crossings between the US and Canada. Mayor Jim Watson said the state of emergency declaration “reflects the serious danger and threat to the safety and security of residents posed by the ongoing demonstrations and highlights the need for support from other jurisdictions and levels of government.”