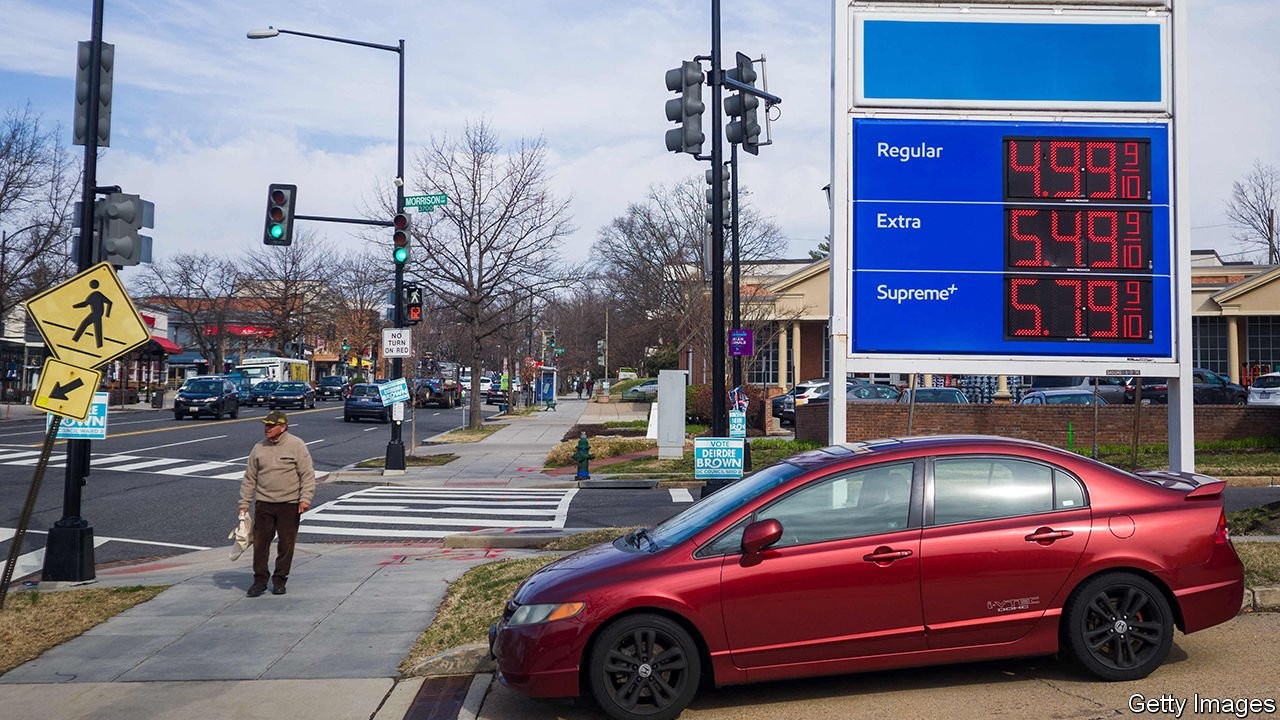 LAST SUMMER, amid mounting alarm about inflation in America, economic advisers in the White House penned a blog post in which they examined historical parallels for the building price pressures. Although the press was full of comparisons with oil shocks in the 1970s, they wrote that a nearer relative was the dislocation after the second world war, when supply shortages interacted with pent-up demand to drive up inflation. It was a well-reasoned argument. But the surge in oil prices over the past month, in the wake of Russia’s invasion of Ukraine, gives rise to an unsettling question: is the global economy now seeing a 1970s-style oil shock on top of a late 1940s-style supply crunch? To be sure, no serious economist expects inflation in the rich world to reach the giddy double-digit heights of those episodes. Nevertheless, the oil shock is a painful development. According to figures released on March 10th, consumer-price inflation in America already stood at a 40-year high in February, at 7.9% year on year; the rate in the euro area exceeded 5% (see chart 1). Prices had been expected to come off the boil as the rich world put the worst of the covid-19 pandemic behind it. Now the new consensus is that inflation will remain uncomfortably high in America, Europe and elsewhere over the coming months. And as if any more bad news were needed, rolling lockdowns in parts of China, including the tech hub of Shenzhen, could add to supply-chain strains. The most striking evidence of the upward shift in inflation expectations can be found in fixed-income markets in America. ICE, a financial firm, distils a few different numbers, including yields on inflation-protected bonds and interest-rate swaps, into short-term and long-term indices for gauging expectations. In late January the expected rate of inflation over the next year was 3.5%. By March 11th, it had soared to 5.6%, far and away the highest since the pandemic began (see chart 2). At the same time, longer-term indices have been a little calmer. A gauge of expected average consumer-price index (CPI) inflation over the course of five years, starting five years down the road, is 2.6%. That is about half a percentage point higher than a year ago, but not terribly far off the Federal Reserve’s goal of keeping inflation to an average of 2% (as judged by another measure that is typically somewhat beneath the CPI gauge). Europe has seen similar, if slightly steeper, trends. The one-year inflation swap rate rose to 5.9% on March 8th. Markets are inherently volatile, so deriving inflation predictions from bond yields should be taken with a pinch of salt. But the shift in prices is broadly in line with what economists are forecasting. Last week Bank of America raised its inflation forecasts for much of the world. In America it now expects inflation over 2022 as a whole to average 7%, up from its prior forecast of 6.3%. In the euro zone it sees an even bigger increase, with inflation averaging 6% this year, well above its previous forecast of 4.4%. The challenge is greater for Europe because of its high dependency on Russian gas, which supplies about 45% of its gas imports. In an indication of just how pervasive the pressures are likely to be, economists are even ratcheting up their inflation forecasts for Japan, where deflation has long been the bigger threat. On March 8th S&P, a rating agency, said that Japanese inflation would average 2% this year, more than double its previous prediction. So far forecasters expect a relatively modest increase in overall inflation in emerging markets. But rising food costs will be especially damaging for their poorest citizens. Two related questions emerge from these forecasts. The first is whether the rise in oil prices today will feed through into lofty inflation in the longer run. That will be a risk if more people take high inflation as a fait accompli and demand big pay bumps as a result. Yet there is reason for cautious optimism on this front. A large body of research shows that the pass-through from higher oil prices into non-energy inflation is quite limited. For instance, Goldman Sachs, a bank, calculates that a 10% increase in crude-oil prices leads to a jump of nearly three-tenths of a percentage point in headline inflation in America, but to an increase of just about three-hundredths of a percentage point in core inflation (stripping out food and energy prices). That helps to explain why market pricing for longer-term inflation remains relatively subdued. The follow-up is what central bankers choose to do about fast-rising prices. Whereas the pandemic was terra incognita for them, oil shocks are at least more familiar. The received wisdom of the past few decades is that, if anything, fiscal and monetary support may be needed, because rising energy prices act as a drag on consumption. That is particularly true for Europe, where the hit to growth is likely to be the largest. But on March 10th the European Central Bank surprised markets by announcing that it would wind down its bond-buying more quickly. In America, where the economic downsides from the Ukraine war are milder and inflation has been stubbornly high for months, the Fed is unlikely to be deterred from raising rates. It is widely expected to kick off a tightening cycle at a meeting of its rate-setting committee that wraps up on Wednesday. But Jerome Powell, the Fed’s chairman, is also sure to devote much time to talking about geopolitical risks. It was hard enough for central bankers to get a good read on the economy last year, given the pandemic and supply-chain snarls. Now they also have to think through the consequences of war.