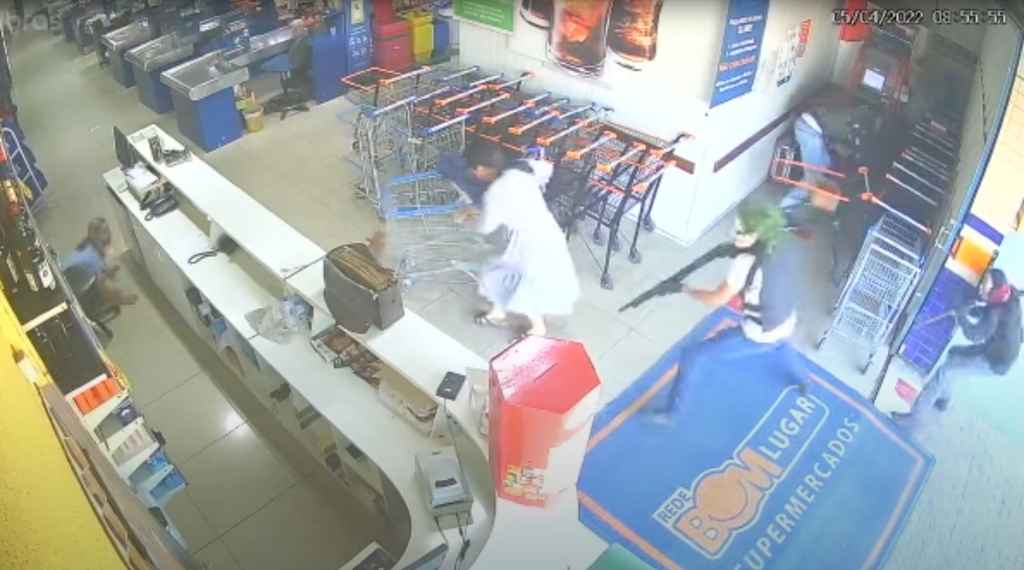 Holy armed robbery, Batman! A team of masked gunmen, including one disguised as the Joker, stormed into a supermarket in Brazil and opened fire on guards and shoppers, intense video shows. The 75-second clip of security footage shows the real-life supervillains rushing into a market early Tuesday in Sorocaba, knocking one guard off his feet as a cashier hid behind a counter and a female shopper appeared to be struck in the foot by the gunfire. The three-man robbery crew seemingly led by the Joker then took aim at workers reloading an ATM machine with cash and tossed several large bundles of money onto the ground before making off with them, the footage shows. The heavily armed crew, including another suspect sporting a Salvador Dalí mask, shot one guard in the leg as they rushed into the supermarket and later led him to the entrance as they fled. The gang then unleashed a hail of bullets outside the supermarket in an apparent attempt to scare off witnesses in and outside of the store, including one man who was wearing a Batman T-shirt as they stormed inside moments earlier. The crew fled the scene in a getaway car and no arrests had been made. It’s unclear how much money the Joker’s robbery crew got away with during the daring heist, according to local reports.