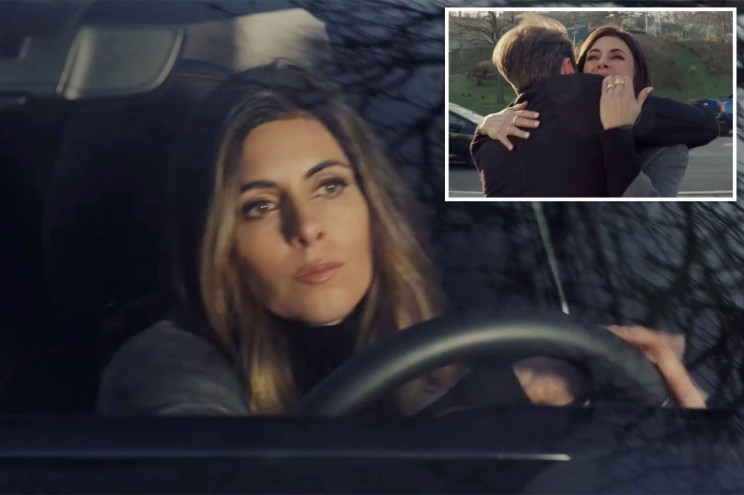 Chevy has set social media alight with a Super Bowl ad that sees “The Sopranos” siblings reunite for the first time in almost 15 years. Actors Jamie-Lynn Sigler, 40, and Robert Iler, 36, reprised their roles as Meadow and A.J. Soprano in the 60-second commercial, which aired during the second quarter of Sunday evening’s game. “The Sopranos” showrunner David Chase directed the ambitious ad, which recreates the iconic opening of the original show and rewrites its famously ambiguous final episode. In the original series, the opening credit sequence sees protagonist Tony Soprano driving his Chevy Suburban from Manhattan to New Jersey as the song “Woke Up This Morning” by Alabama 3 plays in the background. In Sunday’s night Super Bowl ad, Sigler — playing Meadow — is now in the driver’s seat of a Chevy (although it’s a plush new Silverado). She traverses the same route her on-screen dad, while “Woke Up This Morning” also plays in the background. At the end of the commercial, Sigler pulls outside Holsten’s diner which famously featured in the final episode of “The Sopranos” back in 2007. The eatery was the last place Tony Soprano was seen — and it’s unclear whether the character was killed off just after the final credits rolled. During that episode, Meadow was having trouble parallel parking outside the establishment — but in the new Chevy commercial she’s no longer plagued by that problem. The character smoothly parks the Silverado, jumps out of the vehicle and meets younger brother A.J. The pair share an emotional embrace before they walk off together toward the diner. The ad proves that the siblings weren’t killed off after the final episode of the show — as has been posited in the past. Fans of “The Sopranos” flocked to social media to share their exhilaration about the ad. “I mean nothing can top that Chevy Sopranos commercial right?” one excitedly asked. “LOVE the Chevy Silverado commercial with the Sopranos. James Gandolfini would be proud,” another cooed. Gandolfini — who played Tony Soprano — passed away 2013. Sigler spoke with People about filming the commercial, and said her on-screen dad was not far from her mind. Whenever we do anything with “The Sopranos” your first thought is always Jim,” she stated. “His presence was very much felt throughout it all, of course, because anything we ever do having to do with “The Sopranos” he is there. And just the thought of that opening sequence with him, it’s so iconic. He always drove that Chevy Suburban everywhere. It’s how we close our eyes and picture Tony Soprano.” Sigler added that she is still close friends with Iler, and she enjoyed working with him and [showrunner] Chase again. “Even getting direction from David Chase and seeing our old camera operators that we had worked with throughout the seasons… It was this eerie thing where Robert and I both said, ‘We could hop back into playing these characters in a heartbeat,’ ” she stated. “It was really cool to get a moment to experience that.”