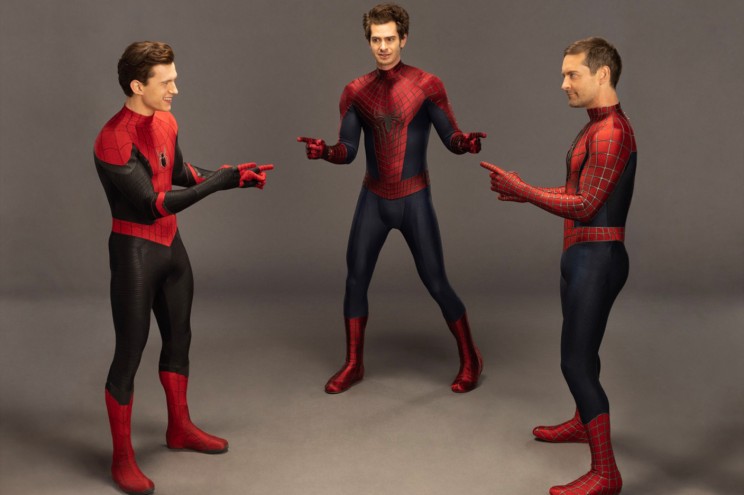 Three Spider-Mans walk onto a set … and re-create one of the most iconic memes. Tom Holland, Tobey Maguire and Andrew Garfield posed for the ultimate comic photoshoot to promote the upcoming release of “Spider-Man: No Way Home” on 4K and digital streaming. “Of course, we got THE meme,” wrote the official Twitter account for the film, which became the highest grossing picture of the pandemic era with $11.7 billion globally. “Your new lock screen just dropped,” they quipped. The meme depicts three animated Spider-Mans point at each other — a scene which originated from the 1960s “Spider-Man” cartoon, during an episode that features the real superhero and two imposters. see also The image has been widely used on social media as a visual metaphor for hypocrisy. It was Garfield, 38, according to an interview with Holland, 25, for IndieWire, who suggested the three live-action Spider-Men — each iconic in their own rite — pay homage to the gag while filming “No Way Home.” Spider-Man fanatics, of course, were bugging-out. “Now release a poster,” one pleaded. The third installment of Marvel’s blockbuster iteration starring Holland as the arachnid superhero, which is also the top-earning Spider-Man movie thus far, is nominated for Best Visual Effects at this year’s Oscars. Maguire, now 46, starred in Sam Rami’s “Spider-Man” trilogy between 2002 and 2007 for Sony Pictures, who rebooted the character with Garfield as “The Amazing Spider-Man” in 2012 and in the 2014 sequel. “Spider-Man: No Way Home” is set to swing home on March 22 on digital and April 12 on 4K UHD and Blu-ray.