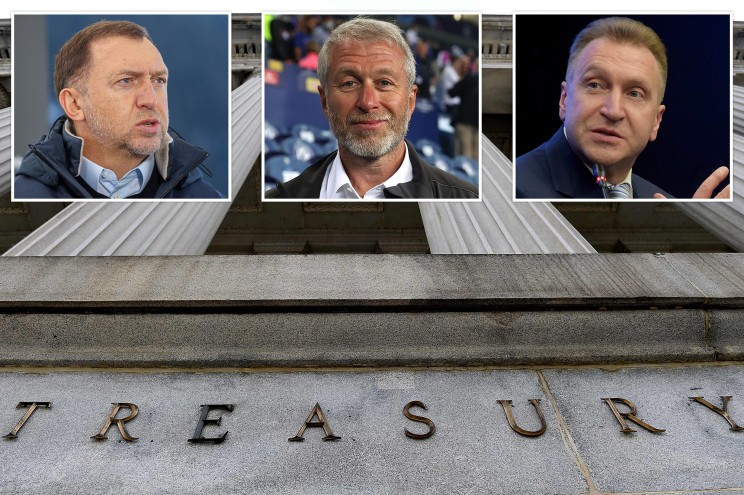 Not only are Russian oligarchs having trouble hanging onto their mansions and yachts — they’re struggling to keep their fancy New York lawyers. Over the past few days, reps for Igor Shuvalov have been frantically calling to find high-powered American attorneys who will take on the 55-year-old former Kremlin operative, whose family fortune has been estimated at upwards of $200 million, sources close to the situation told On The Money. But even legal eagles who would traditionally work with dicey clients for the right price are now turning down deep-pocketed Russians like Shuvalov, who sources say is angling to sue to reverse sanctions imposed against him by the US Treasury on March 3, the sources said. “Nobody is going near these cases,” one top New York litigator who has previously worked with oligarchs told The Post. “It was a tough one to pass up since I could’ve charged whatever I wanted but it’s too radioactive.” Shuvalov, who lately has gotten attention for owning a luxurious London apartment despite also facing EU sanctions, didn’t respond to a request for comment. To be sure, many of the nation’s top lawyers haven’t been known for overly discriminating standards when it comes to scrupulous clientele. But at least one attorney who has recently declined to work with oligarchs said Russian President Vladimir Putin’s actions amount to a “genocide” as public pressure against his invasion of Ukraine ramps up. “Vladimir Putin is even worse than Jeffrey Epstein now,” said Bill Browder, an investment manager with deep knowledge of the Russian financial system. Browder lobbied for and helped craft the Magnitsky Act, which opened the door for the US to sanction foreigners. “Attorneys who have worked for all sorts of dubious characters and gladly took money from Putin’s allies before now realize Putin’s allies are so heinous, even they won’t touch them,” Browder adds. White-shoe law firms that have operated in Moscow for years including Debevoise & Plimpton, Latham & Watkins, and Cleary Gottlieb Steen & Hamilton have all recently announced they are shuttering their offices. But offloading individual Russian clients is a trickier task for law firms. “You can’t just ax existing clients,” one attorney told The Post. “You need to find someone to take on the case — and that’s not easy right now.” “These law firms are damned if they do and damned if they don’t,” Jimmy Gurulé, a former undersecretary of the Treasury for terrorism and financial intelligence in the Bush administration, told The Post. “It could be a breach-of-contract suit if they get rid of their clients, but holding on to clients could result in significant reputational damages.” There is nothing illegal about taking on oligarchs as legal clients, notes Erich Ferrari of Ferrari & Associates, who repped Oleg Deripaska after the Russian billionaire was slapped with sanctions in 2018. “The recent sanctions authorize certain transactions including legal services,” said Ferrari, who filed a federal suit on Deripaska’s behalf to undo the sanctions in 2019 that was defeated in court last year. “It’s pretty standard for blocked person to be able to receive legal services.” Ferrari adds sanctioned individuals can’t make payments from any frozen assets in the West but would be able to transfer money from Russia for the purpose of paying a lawyer. These oligarchs have “too much at stake and too much to lose not to contest this,” a person with knowledge adds. Nevertheless, the legal route to challenge sanctions isn’t easy. Specifically, oligarchs will have to take the Office of Foreign Assets Control, which is part of Treasury, to federal court and make the case the sanctions were “arbitrary and capricious” or that Treasury doesn’t have governmental authority to levy the sanctions. “Oligarchs trying to challenge this have a tough legal hurdle to overcome,” Gurulé said. Treasury officials didn’t respond to requests for comment. Treasury sanctions separate oligarchs from their assets. While it’s up to the private sector to implement, the law mandates that those who are sanctioned are unable to access or use money, real estate or any other holding. “Public opinion is very strong in favor of supporting the Ukrainians,” Robert Kahn of political risk consulting firm Eurasia Group told The Post. “There is continued pressure to do more to support them.”