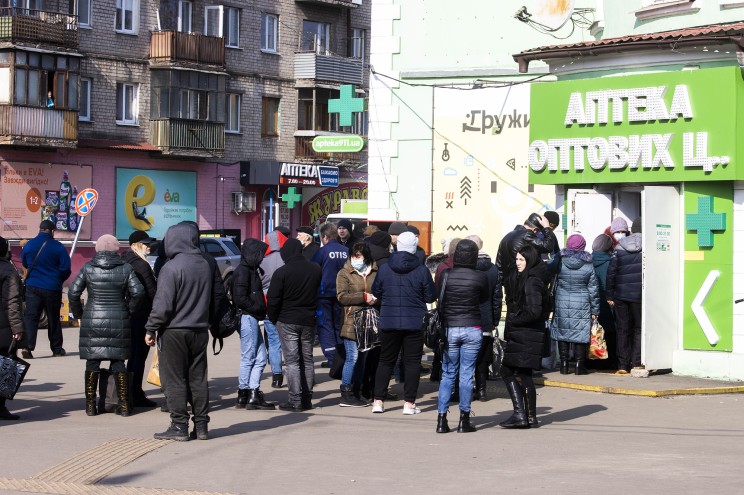 Panicked Ukrainian citizens are scrambling to take out cash Thursday as the Russian military launches a full-fledged invasion of the Eastern European nation. Images taken in Ukraine’s capital, Kyiv, and other major cities showed long lines forming at ATMs after Russian President Vladimir Putin ordered the invasion. Meanwhile, the National Bank of Ukraine enacted a temporary cash withdrawal limit of 100,000 Ukrainian hryvnia per day — the equivalent of about $3,339. The value of the hryvnia fell about 3% on Wednesday and was trading at roughly 29.79 each relative to the US dollar. The currency dropped to its lowest level since 2015, according to Reuters. Ukraine’s central bank also halted foreign exchange cash withdrawals and said it would fix the official hryvnia exchange rate as hostilities roiled domestic markets. Credit and debit cards were still functional as of Thursday. The ATM lines were just one sign of unease as Russian tanks roll into Ukraine and military positions face aerial bombardments. Some Ukrainians rushed into supermarkets and other stores to gather supplies, while others packed bus stations or attempted to flee population centers on congested highways. Signs of financial panic were also evident on the streets of Moscow, where lines formed at ATMs owing to fears that the Russian government could limit withdrawals. Reports circulating on social media suggested some Russian banks were running low on money, according to the Wall Street Journal. Get the latest updates in the Russia-Ukraine conflict with the New York Post’s live coverage. The Russian ruble sank to a record low after Putin ordered the invasion, while Russian stocks cratered by as much as 45%. President Biden and other world leaders have signaled plans to enact devastating sanctions against Russia following the incursion. Meanwhile, US stocks plunged as investors brace for fallout from a prolonged conflict, which could upend the global economy’s fragile recovery from the COVID-19 pandemic.