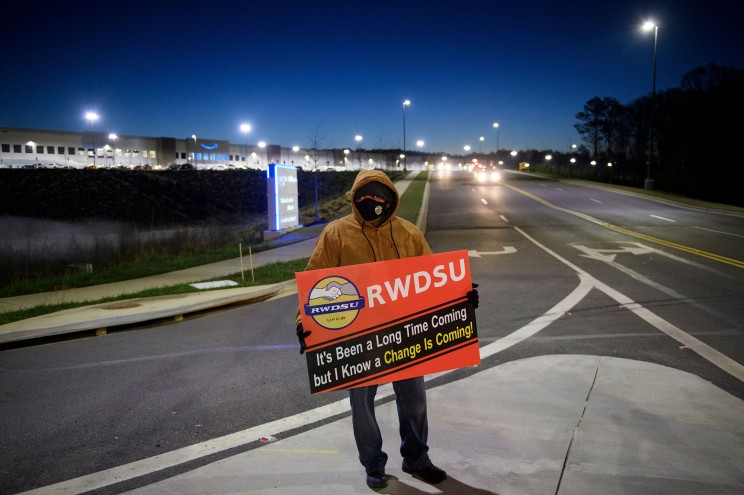 A US retail workers’ union on Tuesday accused Amazon of unlawfully interfering with a union election at an Alabama warehouse where the company had already been found to have engaged in unlawful conduct to deter labor organizing. The Retail, Wholesale and Department Store Union (RWDSU) filed charges with the National Labor Relations Board (NLRB) claiming Amazon removed union literature from employee break rooms, limited workers’ access to the warehouse before and after shifts and forced workers to attend anti-union meetings. Amazon did not immediately respond to a request for comment. Scrutiny of working conditions at Amazon has intensified in recent months, with some employees seeking to organize at facilities in New York and Canada. A victory at even one warehouse would be a milestone that labor experts say could invigorate the US labor movement. The NLRB sent unionization ballots to workers at the Bessemer, Ala., plant earlier this month and will tally the votes at the end of March. The RWDSU was handily defeated in an election held last year, but the NLRB threw out those results after finding that Amazon unlawfully influenced the vote by encouraging workers to place ballots in a mailbox on company property. Amazon and a group of New York workers last week agreed tentatively on terms for a union election at a different warehouse, and an organizer said that vote would take place late next month. The charges filed on Tuesday could lay the groundwork for the RWDSU to challenge the results of the pending election in Alabama if it loses. The union said in the charges that meetings featuring anti-union messaging that Amazon workers are required to attend are coercive, and that workers should have the right to opt out of them. So-called “captive audience meetings” are currently legal under US labor law and are a common feature of employer campaigns to discourage unionizing. But the general counsel of the NLRB, an appointee President Biden, recently said she wanted the board to reconsider that precedent. Shares of Amazon, which recently announced a Prime membership price hike, were trading down 1.6 percent in the early afternoon on Tuesday.